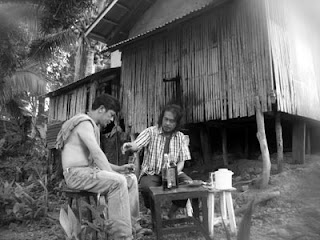 "Is this what a Nostromo sequel would look like, shot by Pedro Costa?" (Danny Kasman)

"Surreal, absurd and sad—all hallmarks of a Lav Diaz film—Butterflies, and indeed there are actually butterflies, is all the more haunting in that it seems to be foreshadowing a real-life event—the killing earlier this month of Canadian-Filipino film critic Alexis Tioseco and his partner Slovenian film critic Nika Bohinc, likely by people they knew, but were not wearing masks." (Wise Kwai)

These low-constrast images are fascinating. I kept thinking, 'These shots seem so simple, so obvious, and yet I can't recall a film that looks to have been made quite like this.' Roaring white noise in the background will give way to dead silence from shot-to-shot; roosters crow all around you in one take; motors and traffic. Murky depths everywhere. Beautiful, ugly, picturesque, mundane: this video is balanced on a knife-edge.

The plot of Butterflies Have No Memories, such as it is, reveals itself slowly and obliquely. There's a dead-and-gutted mining town. A Canadian woman, Martha, comes back to this place, where her family used to live in its industrial heyday. She tries to socialize with her old friends and family employees, who are too busy with their own problems & the getting-on-with of life. No time or inclination for idle nostalgia in a home they've never left, a privileged past they've never romanticized. Some of the villagers concoct a plan (with different levels of moral feeling) to kidnap Martha. From there the film goes even deeper into an abyss. Somehow Butterflies Have No Memories seems to be both in the vein of novelistic, richly structured moral exposé and as well in the "slow," "meandering," small-s surrealist paradigm of contemporary festival cinema.

I have made some effort towards making sure Filipino cinema is represented in my UE project. More than any other, Mr. Noel Vera's site has been helpful.

How are you finding these films?

This one played as part of a three-short program (Visitors), all of them made for the Jeonju film festival. It was a one-time screening here in Chicago. (The other two films were Naomi Kawase's Koma and Hong Sang-soo's Lost in the Mountains, both of which were good, but neither of which packed the sheer punch of Diaz's thing.)

I think some of his films on bit torrent & things like that. I don't know if you use that ... otherwise it seems like festivals and one-off screenings are the way to catch them.

The fact that Diaz's movies are mostly about as long as Satantango doesn't help matters ...

Since you mention him in your post, Pedro Costa also made a film for a Jeonju omnibus (I'm not sure whether it's a one-off or if they do a different one every year), The Rabbit Catchers (you probably already know). It's quite glorious.

Nathan - yeah, I saw Rabbit Catchers, good stuff (obviously)! The other things in that same Jeonju program (Farocki's Respite and Eugene Green's Signs, I think it was called, were quite good as well--did you see them all together?).

Jit - yes, I'll have to think more on Diaz's style as I get around to more of his films. I didn't expect you to mention Man on Fire (even as a matter of contrast). Ha!

I heard from LAv(while he stay in BKK on his rerospectvies) that he doesn't sastified the Jeonju version much , actually he cut another version around 1 hour and i heard that it will be just the first part of ten chapters 's film that he will shoot in the future :)

Filmsick, thanks, that's interesting to know. The 58-minute version was the one that shown as part of this program.

Have been reluctant to leave a comment in the vein of "Butterflies ain't all that, just wait 'til you see the others!", but can't resist. The longer works really are where it's at.

[can't find a link to your e-mail address on here, Zach, but if you do want to get cracking on them, drop me a line.]

Jeff BBz said...
This comment has been removed by the author.
12:42 PM

I'm still very much interested in giving him a chance and the snippets I've seen of other works seem good. But I saw THE CRIMINAL OF BARRIO CONCEPCION at PIFF this year and was very disappointedl. I am open to the chance that I just mis-watched it, and I haven't really looked into what anyone else has said about it (and also don't know much about Diaz either). But I felt like it was "low-budget" in all the wrong ways (and I love low-budget, both purposefully or forced) and fairly dull (and I don't think "slow" films are dull)(But also yeah it was only "slow" when compared to hollywood) Perhaps it just hasn't aged well? Or perhaps I just missed the boat, and I'm not the bad assed film viewer I thought I was?

Jeff, yeah, not having had experience with other Diaz films, I can't really say - but this one, at least, seemed "slow" in the most canny, absorbing ways. I wanted more!

Yeah, despite Barrio I'm still eager to check out his other stuff. I think my calling it "low-budget" may have been the wrong term, slightly. I think a more apt description would be that if for example I were staying in a random hotel in south east asia, watching TV late at night, and Barrio came on, and I didn't know what it was, I would have watched it for a few minutes thinking it was just some random TV film from the 80s (I know its from '98), and then changed the channel not really thinking anything else about it.