"Kingdom of shadows," "phantom empire"—what could we get out of the suggestion in such terms that kinoland could be ruled? Obviously cinema is (among other things) a place or apparatus for fantasies of knowledge and control. Obviously, too, there are a wide range of fantasies, a lot of different kinds and objects of knowledge, modes and objects of control. To move across space, to unify time, to choose to reveal oneself only when one needs to (and even then, remain an enigma, like an Internet cookie that can't be deleted) ... this is one possibility.

"Acousmatic, specifics an old dictionary, "is said of a sound that is heard without its cause or source being seen." We can never praise Pierre Schaeffer enough for having unearthed this arcane word in the 1950s. He adopted it to designate a mode of listening that is commonplace today, systematized in the use of radio, telephone, and phonograph records. Of course, it existed long before any of these media, but for lack of a specific label, wasn't obviously identifiable, and surely was rarely conceived as such in experience. ...

"To understand what is at stake in this distinction [between visualised and acousmatic sound], let us go back to the original meaning of the word acousmatic. This was apparently the name assigned to a Pythagorean sect whose followers would listen to their Master speak behind a curtain, as the story goes, so that the sight of the speaker wouldn't distract them from the message. (In the same way, television makes it easy to be distracted from what a person on-screen is talking about; we might watch the way she furrows her eyebrows or fidgets with her hands; cameras lovingly emphasize such details.) This interdiction against looking, which transforms the Master, God, or Spirit into an acousmatic voice, permeates a great number of religious traditions, most notably Islam and Judaism. We find it also in the physical setup of Freudian analysis: the patient on the couch should not see the analyst, who does not look at him. And finally we find it in the cinema, where the voice of the acousmatic master who hides behind a door, a curtain or offscreen, is at play in some key films: The Testament of Dr. Mabuse (the voice of the evil genius), Psycho (the mother's voice), The Magnificent Ambersons (the director's voice)." 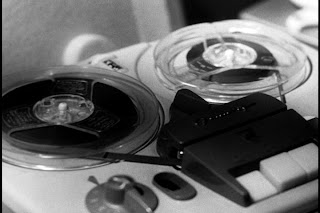 Dr. Cordelier's testament, an audio recording whose narration announces the final reel or two of Renoir's quite excellent Jekyll & Hyde telefilm (1959). Might reels have a certain significance? The film was shot according to television methods, with multiple cameras. Renoir conceived of this project as "amphibious." He came to French television here during a stage of post-WWII Europe where the marketplace was changing, and the industrial cinema was looking for more cost-effective means of reaching its audiences. Evoking, if not thematizing, a technological shift, Le testament du Docteur Cordelier expands the late 19th century recording principles (indexical traces) into an unsettling, explanatory acousmetre (the testament, voiceover, of the good Docteur). From the localized audio reel to the power of broadcasting, imagined as the privilege and corollary of omnipresence.
An episode of The Outer Limits, "O.B.I.T.," (1963), directed by cult favorite Gerd Oswald ... In the opening shot: the camera dollies over to a hand uncannily like that of M. Opale, the Mr. Hyde of Renoir's film. 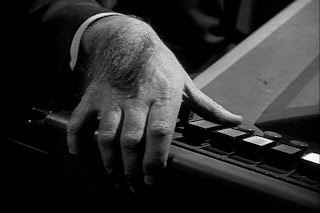 The hand of the man behind O.B.I.T. 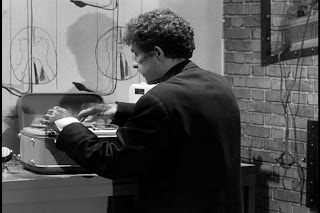 M. Opale
In both cases, the hair on the back of the hands suggests the enigma of these otherworldly humanoids: an otherworldliness whose fantastic origin be in outer space ("O.B.I.T.") or the body electrochemical (Stevenson/Renoir). But it's a charmingly corporeal, earthy kind of clue.

The secret of science, as depicted in Cordelier and "O.B.I.T," might as well be a religious or fantastical secret. And when its truth is revealed, unveiled, as it comes to be gradually over the course of both works, it presents the picture of knowledge without imparting it: we (and the other characters) do not really know how Cordelier conducted his experiments, or how the Outer Band Individuated Teletracer operates. It's beside the point. We've been brought face to face with a technological sublime in each case, one that has immense and terrifying ramifications for the way people interact with one another. A common feature to both storylines: the horrifying appeal of impunitive disguise.

Jeff Sconce, in Haunted Media, compares the O.B.I.T. to something reported in Life, 1964: the Tanner Electronic Survey Tabulator (T.E.S.T.), apparently a truck equipped with technology that infiltrates surrounding homes to see if the television sets are on, and what channel they're tuned in to. The power of surveillance, in the service of TV ratings!, plays upon all manner of paranoid and not-so-paranoid fears. But even more than the fantasies of surveilled victimhood, what about these images of omnipresent vision as outright manifestations of the role of victimizer?

The Scorpio Killer to Dirty Harry when he's making him run all over San Francisco with a yellow duffel bag: 'I'll be watching you. Not all the time ... but you you won't know where, or when.' It's a popular trope. Yes, yes, Bentham, Foucault, panopticons, all that ... yet what about the appeal of being the enforcer in the center of the panopticon, the fellow with the megaphone who can potentially see and know all around and yet not be seen? (And is this not also the appeal of the disguise about which nobody knows, and through which one can exercise one's maladjusted Hydelike fantasies?) It is commonplace to bring up Foucauldian riffs on governmentality, and the figure of the panopticon, as though one is constantly raging against this machine, against power. But I wonder if we read this fascination (with the problem, and with the turning of a minor point in Foucault's entire body of work into one of his calling-card "themes") as itself a symptom, or a fantasy. A repetitive denunciation under the terms of tu quoque.

When one looks at a character on the O.B.I.T. screen—it's a matter of honing on bioelectric signals—one sees a close-up of that figure as though on a television screen ... though their clothes transmit across space to the screen (for reasons of television decency), all other props do not. A woman smokes a cigarette that does not show up on the screen; a man reads an invisible newspaper. These kinds of limitations serve as trace elements of a reality principle which strengthens the fantasy. It's a trope in cinematic depictions of invisibility: throw paint, slime, or flour on the invisible figure, and its outline will be revealed: the Achilles heel of the sheer power of invisibility. I think we would be right to recognize, in intellectual fascination with the panopticon a certain attraction to its sadistic powers—and, further, the possibility of masochistic contours to kino-aided fantasies of being, seeing all, and imparting this information to our voyeuristic victims as we see fit. (Even when caught, Cordelier and O.B.I.T.-villain Byron Lomax seem powerful.) Something or somebody is always implicitly presumed to watch us watching, and a sign of our limitation even in sensory omnipotence, even in our spatiotemporal privileges, is the boundary of a certain pleasure range.

(This principle that one must be unclothed for invisibility to truly work, does set up the invisibility joke that has gotten me to laugh the hardest: an episode of South Park where Cartman tiptoes naked across a stage in front of the whole town, convinced he's an unseen ninja.)

I believe Gerd Oswald fled Germany in the late 1930s but was younger than Fritz Lang or several of the other Germanic émigrés of the time, and did not start directing films until the mid-1950s. He directed more than a few Outer Limits episodes, and Conrad Hall was the cinematographer on this episode and over a dozen others—working also with the directorial likes of John Brahm and Byron Haskin. "O.B.I.T.," so starkly designed, a rich mine for the inventive poverty (or simply uncertainty?) that marked various audiovisual practices whenever they were being pioneered. Poverty Row, television studios. There are shortcuts borne of resourcefulness and there are shortcuts borne of cynicism; for quite a long time cinephiles have presumed the latter cynicism to pervade all but a few premium-channel exceptions of television (without even looking, really looking, the kind of generous looking studious cinephiles might give to films maudits). Thus TV is the bad object, the snotnosed younger sibling of cinema. But Renoir and Rossellini didn't think so. They (and not just they, not just "slumming" greats from cinema) helped to explore a continent whose riches are even more sketchily, unsatisfyingly mapped out than that of the celluloid cinema.

Outer Band Individuated Teletracer. The acronym suggests death, which is of course what cinema either tries to escape or fantasizes about escaping. Or so it's been said.
Posted by ZC at 10:50 PM