This scene had me in stitches: 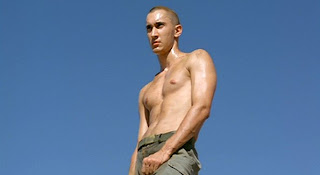 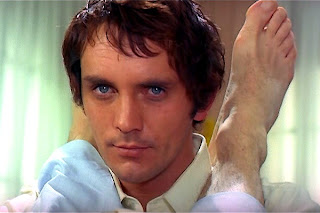 2) Enjoyed your O.B.I.T. write-up, it's the only OUTER LIMITS ep that I like, and I like it a lot. Gerd Oswald has some fantastic 'Scope compositions in A KISS BEFORE DYING.

3) Thanks for the links! Much appreciated.

1) Though the above was not my first spam comment, I believe it was my first anonymous "you're gay" comment in all my five years of blogging. As such, I think it is a special milestone. The poor unnamed author of the comment may well be a stressed-out, acne-ridden teenager who doesn't get many kicks in life other than following links from Sopranos vids on YouTube onto blogs, and then bringing YouTube-level discourse on the same. Eh. If it makes him happy ...

2) Yeah I need to see a lot more Outer Limits, myself - got the complete series for Christmas. Anything that inspires writing will end up here.

3) No problem! If only it didn't all just remind me of how many, many films I haven't seen, even still ...

whoa. i think i might have done the thing that i do in 3d, which is to assume an intimacy with someone that doesn't share in the sentiment.

i read your blog regularly. the comment was not spam...at least in the way you characterized it. it was (sadly) meant to be a joke -- one that assumes the stupidity of what was stated as a direct 'comment' on the video. of course some, if not most of this has to do with it coming from an anonymous account...that really has to do with me being lazy about looking up my google password. (i continue to be lazy) but in the future i'll leave the commenting to others, and if i feel particularly compelled, well then i guess i'll have to dig through some emails and figure out that password.

i do appreciate the fact that you left it anyway.( you could always delete it along with this if you like ) though i will say, to me [ 'scope' ] is more of a trespass on the boundaries of good taste.

Up to you, obviously, but if you prefer not to bother finding your gmail password, but still want to comment & leave your name w/o the account, you should be able to do so. I definitely don't want to dissuade anyone from commenting. Cheers.