In startling images ... a bed scene in The American Soldier recalls Love Is Colder Than Death (or is it Katzelmacher?), while Margarethe von Trotta narrates the basic plot of the later Fear Eats the Soul. Fassbinder was a fellow who knew a thing or two about how to bind together some crucial elements (bodies, rooms, identities, representations, dead time, icons, strangers).

The enormous importance of Heraclitus lies in the fact that he stated with the utmost resolution the unitarily enigmatic character of reality. The experience of opposites did not lead him to a dualistic vision of the world, for it was within the same thing that opposites fought and coexisted or, more precisely, it was the same thing that both was and was not. At the very dawn of Western philosophy, we find in Heraclitus the most resolute and profound negation of identity and the most rigorous formulation of the nature of transit, at once a process of passing from same to same and a persistence of what is in itself different, a restful transmutation and a transmuting repose. Enigma does not consist in change, in the possibility of something new; change is possible only on condition that the thing remains the same and, equally, the thing remains the same only on condition that it changes: sameness is the principle of transit and transit the principle of sameness. It follows that the diachronic dimension is inessential: the present is the true tense of the enigma. Things have been, and they become, what they are. It is in the synchronic horizon of what exists: it is in the reply of the oracle, in the sign given by the Lord of Delphi and it is in the word of the philosopher that all the wealth of explanations and developments, flections and declensions, past and future, are implicit and enwrapped. It is easy at this point to grasp the difference between fold and enigma: for whereas the fold contains only ex-planations, de-velopments, flections and declensions similar to the fold, resembling one another, enigma is the coincidence of antagonists, the concatenation of opposites, the contact of things that are divergent, and even the antagonism of things that coincide, the opposition of the concatenated, and the divergence of things that are in contact with one another. (Mario Perniola, Enigmas, trans. Christopher Woodall, pp. 18-19).

Much of the above is sheer nonsense, of course - if one presumes that language is so impoverished that it can only speak to us directly, purely, and never obliquely. 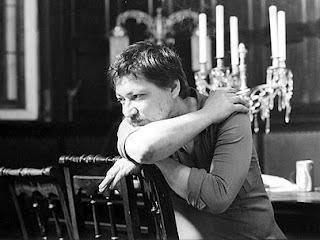 { ... In our new apartment, the whirr of Lake Shore Drive provides a pleasant white noise when the living room windows are closed. When they are opened, however, the cars are loud and present. Just a minute ago, for once, all nearby traffic stopped, and with the windows open I heard silence ... }
Posted by ZC at 11:38 PM