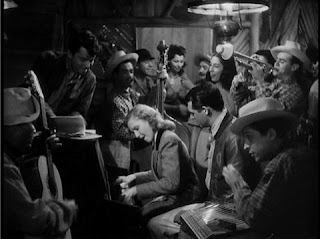 Hollywood's old heroes knew (or learned) how to take losses in stride. The Hawskian hero just needed a chance to do a job. If they worried too much about status they'd, presumably, get themselves in binds, like some of Sturges' dreamers (Christmas in July) or do-gooders (Sullivan's Travels). Wartime changed things; estrangement appeared where once was togetherness. Adventure films in exotic locations, for classical Hollywood, were also a way of spinning yarns outside of history. Once, the old commercial cinema suggests to us (via its partial parentage of theater and vaudeville, of middle-class entrepreneurs and traveling picture shows), people were like this. Termitish activity onscreen suggests something about a history never announced as history.

The difference is in how his phantom operates amongst the still-living. How is he "presenced," how is he acknowledged (including by means of non-acknowledgment)? The hard truths, personal pleasures, and basic lessons of lifetime are etched into older faces. This much is for certain, if compare commercial American cinema today to commercial American cinema fifty or eighty years ago: there were much more interesting faces and bodies back then. No question. It's not an issue for Hollywood today because Hollywood is not interested in depicting real bodies in any substantial or interesting way. The concern is not, never was, one of "realism." Classical Hollywood practiced its own stylizations in its representation of the human body. But they were far more open, back then, to the range of body types. Each type or manifestation (lines on a face, curvature of the upper body, grace or lankiness, eyebrows, teeth) screamed or whispered or hinted at character, ancestry, knowledge, opinion, in short, a locus of personalized history. A frozen-shut catalogue engagingly flipped through, given many short glimpses, by means of "performance."

Once Joe was an indication of who you know, what you lost externally and gained internally. Then Joe becomes the guy who took your job, way off somewhere else; the guy who spurned your advances; the analog crew member on the film set (unglamorous and UNSEEN). Personal history, crystallized in "characters" who were woven into larger still historical-social patterns in old Hollywood film narratives, slowly, creakingly gave way to psychology, which itself structured narratives. The deep ethos of Expressionism was extracted and slathered like margarine over the top of the Hollywood machine. (Real butter got itself thrown out in favor of the cheaper substitute: "too fatty, not good for you," experts assured us.) Under the guises of modernism, personal style, whathaveyou, this particular principle of aestheticization undermined one of the more interesting, though I hesitate to say dominant, features of classical Hollywood, particularly its brand of very wide appeal. Now Hollywood appeals to "everyone" because it offers carefully constructed products meant to do so (let no fool tell you that Hollywood is "stupid," "meaningless," "pointless" for it is all too shrewd, meaningful, and pointed). Hollywood even engages political conflict in its quest to trump it; last year I presented a conference paper on this topic, reversibility, wherein films courted controversial interpretations by cleverly appealing to multiple sides of a sociopolitical conflict (e.g., The Matrix, The Lord of the Rings, 300, etc.). A murdered friend was once a layer added to a catalogue of experiences, including miseries and tragedies; soon it becomes a catalyst for narrative action because the character had been a clean slate of personal history: fully formed, like Athena, they emerge on-screen, ready to be "given" their character by means of some goal, some wound. (But these films do not pursue modernism in this case, do not tend to examine characters as constructions of word, image, plot.)

I wonder: would a dominant consideration of older Hollywood be that it focuses on A story, in relation to its characters, whereas newer Hollywood tends toward THE story? The bildungsroman is a narrative of character definition that can grow out of the "one-among-many" approach; perhaps it has something to do with post-WWII baby boom, the rise of youth/teen culture, and the later increase on the youth demographic to sell tickets, that this appeal to singularity and solipsism drives into the heart of American commercial cinema? Not a satisfactory way to situate the problem, I admit; but neither a set of topics I'd like to give up on ... 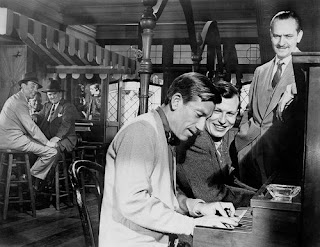 I always like to think about this stuff in terms of figure and ground -- what you see in Ford or in The Best Years of our Lives is a balzacian density of "ground" from which the character or character springs and which gives richness and support to the individual as imaged in the narrative. It is a sociological vision that sees the communal and self as mutually reinforcing, and dependent on each other for health.

In that communitarian sort of structure, we are encouraged to identify with everyone -- including and especially asocial and anti-social elements. Later, in The Searchers, you see a turn towards an anti-hero whose problematic relation to his community, ironically performs the homeopathic healing rite to restore the dysfunctional communal wounds caused by the racism in the community (half-breeds in the house, Ethan, outside) But even here, Figure and Ground are still in balance. (Of course, Clint rips this tension off in Unforgiven and Gran Torino) As Hollywood moved toward totalitarian identification with a narcissistic protagonist, ground becomes (what else?) mirrorlike, psychological and elusive. Ground starts to feel creaky, flat, and functional -- and the image of self also suffers; you start to see character as an aggregation of tics, brand names and activities that are supposed to "sign" the self, but actually make the whole thing even more robotic. This tendency toward first person shooter style characterization seems to reflect a loss of faith in the "capital I" individual in society itself as people find the fantasy of personal action almost an irritant in an increasingly depersonalized (virtual) existence, particularly in contrast with social enviroments like Second Life, facebook, etc.

At the other end of the figure-ground spectrum, of course, are guys like Rosi and Jancso who are nearly all ground, and the density is historically thick and yet the style is essentially ambiguous.

Terry Malick from The Thin Red Line on, is using a strange new ratio of figure and ground for his own mystical, metaphysical and transhuman purposes...

p.s. re: Gramscian organic intelectuals: How about Volonte in Christ Stopped at Eboli, and more cynically, Montand in La Guerre est Finie.

I have to confess I don't understand your post at all.

Anonymous, thank you for your inspiring comment. I'm going to keep thinking about figure/ground ...

Alex, certainly there is a great deal of continuity, including in plot construction. I don't wish or need to prioritize rupture in the history of Hollywood cinema. Nevertheless, the immediately recognizable and often ineffable (at first?) differences between an old Hollywood film and a later (more recent) one jump out, regardless. It's impossible to do a convincing pastiche, you can't overshadow the 'pasticheness'. What is the basis of this? I don't think it comes down to plot alone, or conception--it also has something to do with assumptions, ones made by the people bankrolling and creating the film about how their audiences will respond or is to be addressed. These assumptions maybe have something to do with overall story structures over the cinematic 20th century--though I admit that my schematic ('a story' versus 'the story') is not a sound conclusive distinction. If these were not speculative ramblings but rather something more polished, I would not have used it, though while I was writing it seemed like a useful distinction to posit. But the assumptions also have to do with how important 'supporting characters' are, and in what ways they are important; with what sorts of bodies are on-screen and the attitudes displayed on-screen towards them are ...

let no fool tell you that Hollywood is "stupid," "meaningless," "pointless" for it is all too shrewd, meaningful, and pointed

Yeah, I'm guilty of this. I thought the salespeople believed in what they were pitching, but after the box office smash hit and critical darling The Dark Knight (I'm new at this!) I now know otherwise.

last year I presented a conference paper on this topic, reversibility, wherein films courted controversial interpretations by cleverly appealing to multiple sides of a sociopolitical conflict (e.g.,The Matrix, The Lord of the Rings, 300, etc.)

Was this on the first Matrix movie? I know the Matrix trilogy is open to a variety of interpretations but if you're implying that this is a clever kind of ambiguity that appeals to all takers without offering anything substantial or good, well I have to disagree. I think all three movies integrate their philosophical, spiritual, political, etc. concerns cohesively. I thought the filmmakers did a unique thing: infusing depth and meaning into every aspect of a big budget spectacle of a movie and daring the audience to think.

Now, I can see this with The Dark Knight. I think of that scene where Batman sets up a spy program but then ends up destroying it. You can neither make Batman out to be a tyrant or a savior with that scene but maybe that was just an honest presentation of a complex issue?

"But the assumptions also have to do with how important 'supporting characters' are, and in what ways they are important; with what sorts of bodies are on-screen and the attitudes displayed on-screen towards them are ..."

I'm confused as to how these things would be the main drivers behind such a change.

Did I say they were the drivers behind the change, as opposed to symptoms or effects--let alone main ones?

I don't know what the main drivers are.

"Did I say they were the drivers behind the change, as opposed to symptoms or effects--let alone main ones?"

You didn't, but then I'm confused what we're learning from noting that the presentation of the body changed.