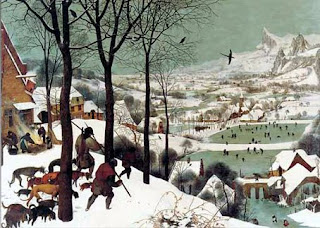 Every thing fashioned from the remains of innumerable other things. The world, bustling, does not care about novelty even though it does nothing but produce it, produces nothing but countless old novelties in fact.

Looking idly for quotes by Buñuel, I find he said (apparently) that "Age is something that doesn't matter, unless you are a cheese." (He also lamented "the decline of the aperitif.") John Ford, vis-à-vis Ward Bond's snobbery, said, "Ward’s father was a coalminer—which is a very honorable profession. My father was a saloonkeeper—which is even more honorable."

The conservative anarchist Albert Jay Nock wrote in his memoirs, recalling a Brooklyn childhood: "A few Germans lived among us, one named Kreuter, a little brisk old man, a great friend of my father, and a master hand at making sauerkraut. When he had got a batch of sauerkraut in prime condition, he would bring over a couple of quarts for my father to sample and pass expert judgement on. The discussions were so long and the aroma so pervasive that my mother finally laid down the law that my father and Kreuter should hold their sessions outdoors or in the woodshed. She said she always knew when Kreuter was coming, if the wind was right, for she could smell his tin pail long before he hove in sight. She also declared she could see the fumes of his sauerkraut push up the cover of the pail once in a while, like the action of a safety-valve, as he was proceeding along; but this may have been an illusion of some kind."

Would it be worth spending more than two seconds thinking about "sour aesthetics"? Maybe not, but I at least like the idea.

Cinema that embraces its own material obsolescence in some way: Reble, Mueller, Brakhage, Morrison ... sure. What about cinema that embraces obsolescence on an extra-material scale? Pasolini captured the vitality that animated living ruins; Fellini too perhaps. (Was it an Italian thing?) Rossellini knew a thing or two about the through-lines which characterize culture, the violent or tender rodeo ropings that constrict us, protagonists of our own brief lives, and occasionally cast us off at the end of the whip.
Posted by ZC at 8:18 PM

Wabi Sabi celebrates decay (transience) as life and design aesthetic. It may apply to your post.