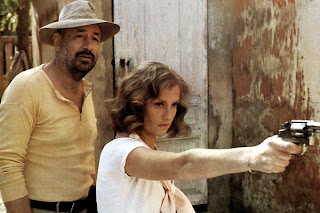 "Realism (and its children in 'literary fiction') was and is largely a formal and political reaction to the vigour of the 'genre' (avant la lettre) habits/tropes/imaginative power of the long 18th century - their revolutionary verve and critical capacity - rather than, as it advertises itself, and as it has been assumed by the major theorists and historians of the novel, from Auerbach to Watt, the result of a direct adaptation of and attention to social and individual reality, naturally arising in the context of the bourgeois individual emancipation narrative." (Le Colonel Chabert in the days of olde, as Alphonse van Worden)

"Each period uses a particular vocabulary to exorcise the demonds that plague it" (Guy Debord, Considerations on the Assassination of Gérard Lebovici; if I recall, Debord says somewhere in this book that he was the spitting image of young Philippe Noiret)

In film & media culture, a paradigm unworthy of our further investment (not to say attention), realism versus artifice (or we could say genre). Twist things a bit and a very similar, and similarly unsatisfactory paradigmatic choice (classicism versus modernism) remains. The relationship between sociopolitical reality and the aesthetic is not, nor need it be, a mimetic one. We move on. 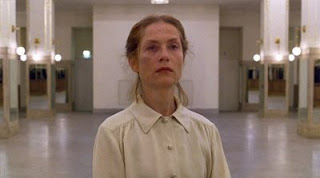 In Haneke's La Pianiste, overhead close-up shots of hands playing the piano remind me, just a bit, of the close-ups of hands practicing & performing in Bresson's Pickpocket. Hands, windows to the soul just as much as the face, expressing the full fury of human guile, craft, depth, and violence. The hands pull the triggers, grab the bank notes, commit the crimes; the hand is a synecdoche for the active subject (the aspirant sovereign). Crime shows are a perennial favorite in television fiction, at least in the States and Europe. These can run the gamut from 'realist' to 'fantastic,' every level between, because their deepest recourse is to the law and sovereignty (of whose operations all are cognizant) and because there place in fiction is to reconstitute these things in an artificial way which will draw eyeballs.

(Speaking of crime television, I'd be interested to hear if any readers could be up to supply me with loans or copies of British series Edge of Darkness, Z-Cars, or Red Riding?)
Posted by ZC at 3:46 PM

Bob Clapes said...
This comment has been removed by the author.
7:19 PM