When I watch a tasteful expose on the horrors of the State, these days, I acquire a new onion layer of respect for a film like Caligula. Robert De Niro's The Good Shepherd, not without its strengths and charms (e.g., it nails waspy emotional repression reasonably well), is relentlessly, thuddingly constrained by its faithful application of Spook History to generic conventions. "The CIA" (sorry, just "CIA") becomes merely a cover; history is titillation. At least some films have the decency not to hide it.

During a wedding scene between Matt Damon and Angelina Jolie, a swinging camera nevertheless manages to capture a close-up on Jolie's face before moving over to Damon's group. A nice bit of camerawork? Expressive of anything? Or was it just another way of getting La Jolie's face onscreen for an extra moment? A Bay of Pigs fiasco reaction: Matt Damon, soon followed by his assistant John Turturro, walks out onto the beach in his slacks & loafers, gazing out over the water. Damon (who gives a fair performances, and deserves credit in this) nevertheless drifts through this particularly numbing narrative cul-de-sac: a story built around conspiracies and personal agency, but always hemmed in by horror movie conventions: the rival-enemy is quicker, stronger, has greater access to information, appears in the dark on your doorstep. Paranoia without psychology or sociology ... or even the supernatural. 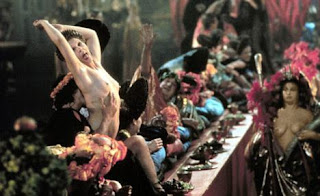 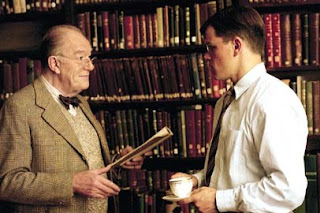 There are, at least, books in The Good Shepherd. The appearance of books on the shelves, and books being used, may be a "soft" marker of a certain audiovisual classicism? Maybe, maybe. (Worth figuring, as a tangent: what are some filmic and televisual depictions of what we could call a Gramscian "organic intellectual"?) Onwards ... 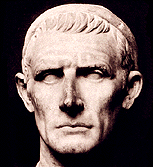