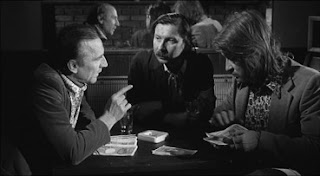 I wish I could exercise my right to be lazy. I'm currently undergoing the busiest period I've ever had in my life. So ... I wanted to jot down a few words to indicate something about my relative absence. (Especially now that, I see below, Alex has demanded new material.) This may also explain, if not excuse, why I may be out-of-touch for long periods of time. Things like sleep, blog writing, and blog reading have had to take a backseat. Movies themselves have had to take a backseat, although this past week or two have seen a slight bump in the film-watching department: yesterday, my first glimpses of Jean-Daniel Pollet's work outside of Paris vu par... (Pourvu quo'on ait l'ivresse and L'Amour c'est gai, l'amour c'est triste), and also recently some Aki Kaurismäki (Girish once cited him as his most repeated-viewing-friendly director), some more Anna Faris, some Rossellini (side note: by coincidence, this was posted on my birthday!). At any rate, EL was created as a public notebook for me to jot down whatever I'm thinking, especially when it's superfluous to more official intellectual requirements, but I just don't have the necessary amount of time/energy/attention to provide adequately for this notebook at the moment. I'm not calling a hiatus or sabbatical because I want the freedom to post a blog entry or two if I get the time and the urge. But if little shows up ... know that it's just Life yanking me along.

Despite the hectic schedule, one must always eat, so let me say a few words about two excellent restaurants in my beloved borough that I had dinner at this past weekend. Mombar is an Egyptian place on Steinway; I have wanted to go here since I moved to the borough in 2005. My fiancée and I—yes, I've also gotten myself betrothed this season—went here on Halloween, as we decided not to celebrate the holiday this year on account of being generally exhausted. It made for one of the emptier restaurant experiences I've had on a Friday night in New York: there was one couple already in the restaurant when we arrived, they left, and a second couple came in as we were finishing up. Given how good the food was, however, this had to have been a fluke because of Halloween. We ordered a spinach & chickpea appetizer (delicious, garlicky), a "Sahara mix" appetizer dish (pita chips with things like hummus + green apple slice on top), a mombar entree (spiced sausage in sauce), and the lamb tajeen. The kitchen gave us a complimentary order of Egyptian fried bread. Himalayan Yak is a recently re-opened Nepali/Tibetan/Indian joint on Roosevelt. We ordered ~9 dishes for 6 people, my favorite of which was the sizzling lamb. But there were also a few fantastic potato-based veg dishes, a solid boar leg appetizer, some quite good steamed beef momos (though Tangra Masala's are still my favorite ever). Should you venture into Jackson Heights and wonder if this place is BYOB, we found out the hard way that it is not, but the management were nice and allowed us to drink our shiraz anyway.

As an addendum, there is Poodam's, which is in my immediate neighborhood and which I ate from for probably the sixth time recently. For years this corner was notorious because it hosted a string of horrible Thai restaurants. (I had the worst Thai food I've ever had there once.) But the current incarnation is a fairly solid establishment, and for this I am thankful. (Though I wanted to move to Queens largely because of the food options, the neighborhood in which actually I live is unfortunately skimpy on good restaurants, especially since Le Sans souci closed.) If you happen to go there, I would recommend sticking to their Isaan specialties and the appetizers. Don't bother with curries or their chicken dishes, which are an improvement on what I tried at the same location previously, but still merely average. Anything with duck, pork, sausage, or seafood, any kind of "salad," or the chive dumplings ... those seem to be the smart choices. OK.

More will come to EL at some point in the next month or two, but I can't say how frequently. And finally: let's enjoy these elections tomorrow ...
Posted by ZC at 7:10 PM

Zach, first: huge congratulations on your engagement! This is fantastic news.

And know that no matter the subject--movies, art, politics, culture, eating, breathing, writing--it's always a pleasure to lay one's eyes on a new EL post.

Thanks for the congrats!

More congratulations from me on your engagement, Zach! Some things are, after all, more important than cinema ...

Funny, the 'word verification' I have to type in right now is QUERED!! Very theoretical!

And nevertheless you find time to write this post

To my mind everybody have to glance at it.