The first thing I noticed about Jon Jost's Sure Fire ('90) was the speech, which captures the way (some) people talk in that deep, desert, mountainous American West—something like a cross between the Midwest and a generalized Southern accent. This is the speech of long stretches of highway and mountains, of desolate rest stops, lonely big sky country. (It's the speech of the sort of fellow I imagine Emmylou Harris & Willie Nelson sing about in one of the saddest songs ever, "One Paper Kid"—or, come to think of it, the people in Mikel Rouse's new music opera Failing Kansas.) The camera doesn't show us the characters in a frontal medium shot or close-up for some time; in fact Jost shies away from close-ups and frontal shots quite a bit in this film. I would not stress the case too far, but maybe there is something to be said for a film which emphasizes environment, custom, ritual in dealing with a weirdly, pathetically charismatic hero. The great Tom Blair exerts a lot of raw personal force in a character to whom nobody who pays attention does so because they wish to.

Monologues become positively Faulknerian, and are rendered mournful not only through the content of the dialogue and the speech tones, but also through the spatial relations between characters. Blair sits and instructs his character's wife at length about what she's to do back home while he's away on business: she doesn't listen. The wives speak amidst the ruins. The scene where Tom Blair's son gets his first gun is a masterpiece of surprise & volume. And so on. I'll try to get some screencaps put up here sometime.

The quality of light in this film bathes a lot of the shots—albeit ones I saw on an old VHS—in almost startling white: the air is complicit in the drama, takes it to another world. Subsisting mostly on a diet of standard, and recent, commercial cinema in recent weeks (buoyed along only by dear Anna Faris) I was clobbered in a way comparable to that when you see a true masterpiece, or when you are very young as a cinephile and only just begin to seek out the "different" stuff, revelling in the ineffable and deep novelty of cinema that scoots around outside the comfort zone that has been established for you. 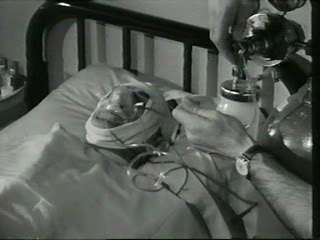 Above: an image from Irving Lerner's Murder by Contract (1958)

Cinephilia is constantly (mis)understood as a pathology, but in many of the objects of cinephilia itself we see the artistic treatment of this problem. Murder by Contract's is a dehumanized hero (a compelling cipher, unlike the psychologized hero of Lerner's Studs Lonigan). The affirmation of will at the expense of life, as well as the attendant allure of such devotion (i.e., for some people) is the very material of this film, and it is not alone. The hero in Murder is well-regulated by time, appointment, duty; immune to vagaries of appetite—sexual or gastronomic. But he's not above his environment, and his code is shaped by something external to it: we could have a fun parlor game speculating about whether it's his Id, his upbringing, his class position ...

I penned that write-up of Studs Lonigan almost two years ago, and still haven't seen a third Lerner film (but I did revisit Murder by Contract).

And check out the two dissolves: 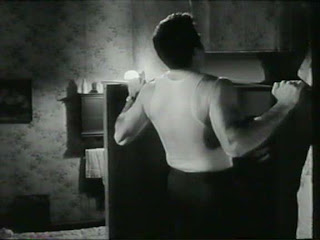 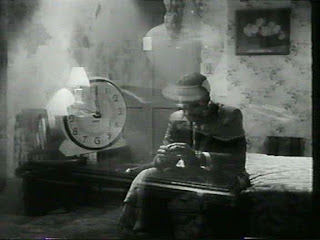 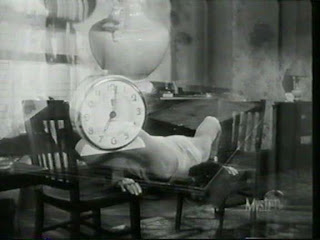 Without doing a bit of research I was positive that Martin Scorsese knew Murder by Contract well and modeled some of Taxi Driver on that film. (Even if you haven't seen Lerner's film I'll bet you thought the same thing when you saw these screengrabs above!) A single bit of googling reveals as much. It goes to show how maybe the source material of classical cinema has been frequently manipulated, misconstrued. Scorsese is sometimes thought of as a politically centrist or right-leaning filmmaker (for the Catholic content, his choice of protagonists, and/or his support of Elia Kazan, perhaps). But if he's good enough for David Ehrenstein, I'm willing to give the world's most cinephilically fascinating fast-talker the benefit of the doubt. The first step in diagnosing the politics of the film school brat generation, the 'New Hollywood' of the MPAA era's beginnings, might be to trace out not only what their films said and how they related to their moment (what Shampoo says about the Nixon era & gender roles, etc.) but also which cues the filmmakers themselves took from their famously self-aware knowledge of the cinema that preceded them.

I think that Scorsese, being a dedicated student of film history, has learned that it is best to keep quiet about one's political beliefs. That said, my own experience with him at NYU was that he was one of the only faculty members who stood up with the film students when we protested the double standard that made our point values less than that of non-arts students. Also, keep in mind that primarily under Scorsese's supervision, the film students made the documentary Street Scenes following the student demonstrations in May 1970. I was a production assistant on that film.

Peter, thanks for the info!

Ah, I love Murder by Contract.

Zach,
a few things re: MURDER BY CONTRACT and Lerner...

Me and a friend of mine have always refered to MURDER BY CONTRACT in conversation as MURDER BEANS (as in bean counting).

via Senses of Cinema's issue on Harun Farocki we get several suprising references to this mammoth film, discussed as if it were as canonical as Ford or Resnais: turns out that for FILMKRITIK it was; they did two Lerner issues in the 70's (for discussion of this see Olaf Moller-- http://www.sensesofcinema.com/contents/02/21/farocki_moller.html )

...and here are Farocki's references to MURDER BY CONTRACT:

1) The first three or four times I saw Murder by Contract (Irving Lerner, USA 1958), it always seemed to me as if the hero committed ten murders before he killed the woman. Then I made a list and could see it was only three. That is a telling discrepancy. The film manages to tell us that the killer has been murdering mechanically for an eternity before the actual story begins. Through this the hero's final killing assignment gains real significance, and the film understands how to fabricate this eternity with a very brief listing. (1982, p. 405-6) - (http://www.sensesofcinema.com/contents/02/21/farocki_knepperges.html)

2) Q: What would you choose to remake?

HF: If at all, I would do a remake of Murder by Contract (Irving Lerner, 1958). I once saw a child who, standing on the Siegessäule in Berlin, looked at his tricycle through a telescope.

I remember reading somewhere else Farocki saying that MURDER BY CONTRACT had a tremendous importance for German history (metaphorically speaking, not popularly). I still think about that. One of the Filmkritik texts on Lerner is titled "Death and Mathematics" - perhaps MURDER BY CONTRACT has shades of that film Godard wanted to make on the Nazi concentration camps, but that would be unbearable, on "how to dispose of ten tons of arms and legs in a three-ton truck? How to burn a hundred women with only gasoline enough for ten?...typists typing out lists...".


Indeed I am eternally grateful to Scorsese for featuring MURDER BY CONTRACT in his great documentary PERSONAL JOURNAL THROUGH AMERICAN CINEMA (and if Kent Jones is reading this: thanks for that one!) -- it was the first I'd ever heard of what an "Irving Lerner" was. Scrosese shows the work-out scenes and says they inspired the work-out scenes and self discipline of Bickle in TAXI DRIVER. He also praises Lerner's great economy in editing, a kind of cinematic short hand. I think he mentions, anyway it's a fact, that he hired Lerner to supervise editing on NEW YORK, NEW YORK -- and that that film is dedicated to Lerner who died during its production.

I see a lot of the kind of drab hate for the American Dream that's in MURDER BY CONTRACT in Scorsese - more to do with decors and those calculations of theirs. Making parallels which converge out of crime and ordinary Americanness. A bitterness. I'm thinking of the scene in GOODFELLAS where Henry Hill, his wife and an FBI agent are in an office discussing their entering into a witness protection program -- shot just like the early contractor/contract scenes in MURDER BY CONTRACT, in the same impersonal, flat environs (some of the shitty office decors of THE DEPARTED remind me of that too) - a meeting which ends up installing the Hills in a cul-de-sac just like the one in MURDER BY CONTRACT - crime in the suburbs and offices, crime for the suburbs and offices. There are a few scenes/decors like this in GOODFELLAS and in general the short hand editing of that film is akin to the barber shop murder sequence in MURDER BY CONTRACT (the Lerner with much more grace and trembling, in my opinion). I'm guessing that Scorsese would find "redemption" (he always does) in final image of MURDER BY CONTRACT insofar as there's a hint of religious iconography in the dead hitman's outstretched hand sticking out of a sewer - but one has to see CITY OF FEAR to realize that Lerner has nothing to do with "redemption", that there is no God or transcendence, that he's deeply afraid of "universal cries of horror", an abyss of nothingness -- and American dreams (atomic, monetary, repressive [after all Lerner was Blacklisted]), the corrosion, suffocation and death they bring.

Someday CITY OF FEAR, Lerner's other masterpiece, will come to the market's surface...UCLA has recently restored it (it's another low-budget Columbia film, with Vince Edwards and many other actors from MURDER BY CONTRACT).

Thanks for further bringing MURDER BEANS to light Zach!!!