Note on a Face 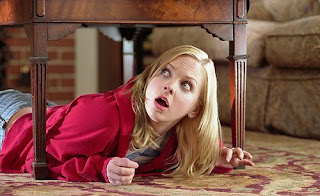 Anna Faris' work in Gregg Araki's pot comedy Smiley Face is a hilarious catalogue of contortions and facial non sequiturs. She lets her eyes get big and her face a little wild, the chin rounding down the gullet with a pouty lip. When you look at, say, Megan Fox in Transformers, no matter what the physical demands of the scene her flawless face remains in the mode of a Calvin Klein ad. Not Faris! With gusto she moves around awkwardly. (Anyone who gets as much a kick as I did out of her rolling "escape" from her car in the parking garage is a kindred spirit.) Is there any other young comedic actress whose tiny movements of facial muscles comprise such a large part of the attraction of the image? The hunch of her back, the tyrannosaurus arms: this unfortunate stoner in Smiley Face had me in stitches.

Will report back if I go through more of the work of La Faris and it proves noteworthy.
Posted by ZC at 6:20 PM

Zach, do you mean to tell me you haven't seen MY SUPER EX-GIRLFRIEND? (Which means you can combine Anna F with your superheroes theme in one swoop!) Also, JUST FRIENDS has some excellent 'Anna singing' scenes. You're absolutely right, it's just what Luc Moullet said: a comic actor must 'stoop to conquer', must make their face, voice and body absolutely ridiculous. Molly Shannon in SUPERSTAR blazed the trail!

Anna Faris deserved an Oscar for her performance in SMILEY FACE! Hilarious! I love her! JUST FRIENDS is a must see!

Anonymous, that links is priceless, thanks!

Adrian, I recall you having a kind word word for Super Ex-Girlfriend, I've put it on my Netflix queue. (I am pretty sure I saw Superstar a long time ago, but I should see it again in light of these discoveries...)

Jen, I think she's the best thing in Just Friends, as you can see from my most recent post ...

Anne Faris is the worst actress I've ever seen in my whole life, without any doubt.