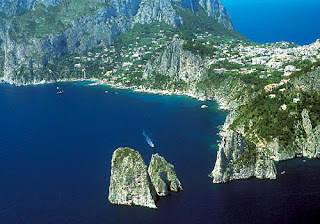 Walter Benjamin lived for a while in Capri and later in Ibiza. I find oddly resonant the little resort towns and islands (to which I've never been) where so many British and Continental writers/scholars of the late nineteenth and early twentieth century vacationed, which in the age of cinema were obliquely monumentalized in the cinephile's eye by the likes of Godard (Le Mépris) and Welles (F for Fake). The same sorts of places that make a vacation for Garrel's addicts in J'entends plus la guitare are earlier seen in cheap softcore Franco films and L'Avventura and Darling and Il Sorpasso. Pound's Rapallo resembles more than slightly the little Mediterranean every-village where Radley Metzger's Score! takes place.

At the bar one could sip a negroni while reading Proust, staring at cats. When I'm an old man perhaps I could spiff it up to look like this fellow. This is the romantic wish promised by the dreamy part of my self that thinks humanistic activity, and the study of cinema, could ever really be lucrative and alluring. 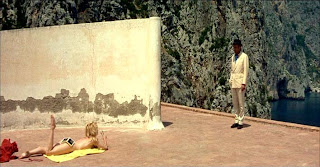 “He's a sculptor,” he told me, “an old acquaintance from my travels. I met him in Capri in 1924, in Rhodes in 1926, at Hiddensee in 1927, and recently on Formentera. He's one of those curious people who spent most of their lives on islands and never feel quite at home on the mainland.”

“For a sculptor, that mode of life seems doubly surprising,” I said.
—Benjamin, “Conversation above the Corso: Recollections of Carnival-Time in Nice” (March 1935)
Posted by ZC at 7:27 AM

For my part every person ought to go through it.