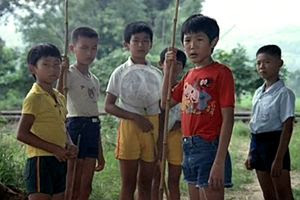 The character at the center of A Summer at Grandpa's, it seems to me, is not the boy but his younger sister, Ting-Ting. At least, she is the one who seems to manifest the intelligence of Hou Hsiao-hsien himself: observant, focused, not always predictable, compassionate but not particularly sentimental, intermittently happy, always subtly searching (and watching). The film doesn't have the "masterpiece tone" of later Hou but there are numerous impressive shots and sequences that exhibit a deep intelligence. Many images, as is by now quite typical of Hou, require elucidation after we're first exposed to them. The highway truck robbery, for instance, takes several long moments of roving camera to insinuate with perfect grace and clarity.
(Taiwanese auteur connection: coincidental and meaningless, I'm sure, but I couldn't help but link the highway robbers' rock-to-the-head attack, not shown in the film, to the brick-to-the-head Edward Yang has one of his neighborhood gang boys suffer at the hands of a rival gang in A Brighter Summer Day. Growing up summers one witnesses painful things.)
Posted by ZC at 7:59 PM

A lot of these Taiwanese New Wave films were nostalgic/autobiographic, but that doesn't mean necessarily by their directors! I couldn't make it to this screening, but I presume based on the gender change that regular Hou screenwriter Chu T'ien-wen might be the guiding personal light here.

I wouldn't dispute this. (Did I indicate that I thought this film was autobiographical? Didn't mean to...)

No no, I didn't mean to imply you said something you actually didn't!

I was just using your minor focus on surprising displacement (boy story to girl story, Hou to Yang) to suggest another auteur of the film...