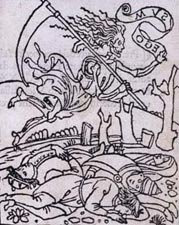 In the future there will be no painters, only those who, among other things, paint. The coming epidemic may wipe out most of us; huddled in villages and cities our weakened immune systems and weakened social instincts will be easily defeated by superbugs. The fantasy of social breakdown suggests to us that it is through our "limitations" that we come to know strength. Moralistic structures on the self reinforce this truism, but it is only because they insist on the terminology of limits and not that of necessity. We feel and are perhaps terrified by the immense freedom of a life constituted by transparent necessity (and at the same time free for absolutely anything else). We fantasize about the apocalypse because it gives us a little of what we crave. But we are constantly required to understand this craving differently than, I think, it truly is. We interpret the limitation of a lack of technology, the constriction of an earlier stage of progress, as though we have landed on the wrong square of this board game, History, and must go back ten spots. We are told lies (we tell ourselves lies) about our violent, dystopic apocalyptic visions as expressions of all that is violent and consumed by appetite, as though true freedom were by necessity tied to this violence and unbridled consumption.

"Indeed, the moderation of genius does not consist of the use of a cultivated language without accent or dialect; it lies rather in speaking the accent of the matter and the dialect of its essence. It lies in forgetting about moderation and immoderation and getting to the core of things."

-- Marx, "Remarks on the New Instructions to the Prussian Censors" (1842)
I have no faith in humanity's arrival at a utopic result. But the impulse is a necessary one; we know that something is very wrong. This is at the core of cinema as Pedro Costa sees it, I think; who has closed the door in life, who may close it in the film? I cringe when I hear relatively privileged people talking in platitudes about how art should "challege preconceived notions," make people uncomfortable, etc. (For this is more often than not a marketing ploy, and is often trotted out by people who wish to sell their brand of trademarked subversion.) Art hasn't this social responsibility; aesthetics have the unavoidable function of providing us with experiences that suggest something about the life we cannot bring ourselves to admit we are fully owed: immediate, detached, cerebral, visceral, erotic, glimpsed, immersed, shocked, consoled, dizzied, expanded, stretched, adulterated, cleansed, and so forth. Some beauty is embedded in peril and disease, but I claim every beauty for myself & mine. It is our birthright. It is the salve to our shocks; it is the bridge erected so that we can cross over. C.S. Peirce saw language, signification, cognition, not only as a means of forming mental habits--but of changing them. This is called learning. The aesthetic experience rapels down and climbs through a dark crevice, and though "art" as we learn in textbooks is unnecessary for human experience, the aesthetic is, I think, inextricable from it.
The cave paintings on Lascaux are the expressions of the deepening gap between, on one hand, a life in perfect harmony with the necessity of history and nature (and thus with no history as such), and on the other hand, a life in which our ancestors are marked by historical record.
"One citizen avoided another, hardly any neighbour troubled about others, relatives never or hardly ever visited each other. Moreover, such terror was struck into the hearts of men and women by this calamity, that brother abandoned brother, and the uncle his nephew, and the sister her brother, and very often the wife her husband. What is even worse and nearly incredible is that fathers and mothers refused to see and tend their children, as if they had not been theirs."
-- Boccaccio on the Plague.
Posted by ZC at 7:01 PM

I have never read a description of art/aesthetics that is more beautiful than what you have written here. If Proust and Rumi could come back, they would thank you too! I really needed to hear that beauty is our right . . .

The dark shadows that you are addressing? These are for all of us to live. I can only say that from what I have experienced, I believe that at the end of suffering is something like a flower. It is a belief. Yet, this beautiful idea does not do the heavy lifting of social responsibility, i.e. it does not take the place of volunteering and helping the people around me directly.

This is a very complicated subject, by its nature infused with guilt. Maybe there are no real answers . . . I just appreciate an honest discussion on the topic.

I think you're just freighting way too much on the back of art. Of course, I would naturally say that - too much time spent reading Plato leads to a natural inclination against the poets. Nevertheless, I tend to get antsy when people mash together praise of immoderation and too much worship of art together. Makes me worry that we're going to get another outbreak of the Stefan George circle or something.

Jen, you certainly know how to swell a person's ego. I'm glad you got something from the post! I think the human experience of beauty stems from the understanding, on some level, of a necessity or even a communion with the world which we no longer feel, of which we have necessarily been robbed by becoming sentient, rational beings. The aesthetic dimension, expressed some times in terms of what we'd designate as art, is one way of marking that chasm in our experience. That is what I'm thinking of late.

Alex, I think you're drastically misinterpreting me. I freight nothing on the back of art! What concerns me is why we have this realm, the aesthetic, which I think is a consequence of our coming into consciousness as a species, and which hearkens into something we have always lost in so doing. There is no "weight" one way or the other, there is only the gap between our existence and the necessity that presumably antedates consciousness. (Certainly I am not immoderately worshipping art; I am not even moderately worshipping it. It's there, it's like rocks, you pay attention to it or you don't, and neither will kill you or make you wise or feed you in themselves.) My first paragraph has nothing in particular to do with art, and my second paragraph is meant to suggest that our aesthetic faculties, which can be met by art, are one potentiality produced by our being human. Is 'art' necessary? Of course not. Is 'the aesthetic' the central & solitary consequence of our human consciousness? Of course not. It's simply what I'm interested in ...

The poet, Rumi, describes such behavior as dissolving into abundance, i.e. a moth being drawn to the flame:

"Judge a moth by the beauty of its candle." - Rumi