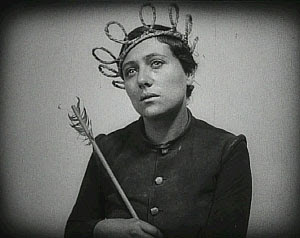 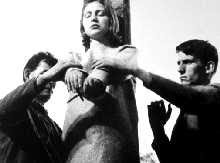 The close-up of female persecution, immortalized cinematically perhaps beyond improvement in Dreyer's Passion of Joan of Arc. The trope finds itself re-interpreted within the broader context of the Bressonian aesthetic in his Trial of Joan of Arc. Rossellini in his own way sought to pare things down at least as much as Bresson (for different reasons, to different ends*). He made his own Jeanne d'Arc film, with Ingrid Bergman, but the work I'm including a screengrab from is Blaise Pascal, his 1972 telefilm--this is not Joan, but an unimportant peasant woman. Working hard to do away with "acting," Rossellini, who used close-ups sparingly in this late period, nevertheless tried to imbue in the very grain of the image, in the contours and colors of the face, something of the substance of humanity. This was not to better illustrate a story but to pinpoint the essence, manifest in a body, of the worldly continuum called History of which we were all part. The progress of Man, as he would have termed it. 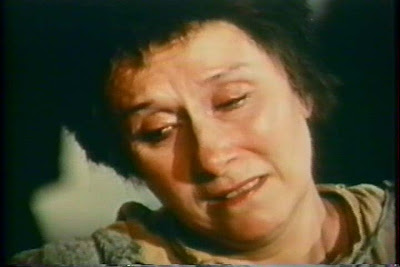 A different strain of cinema reflected upon the image of female suffering--persecution in the courthouse, and destruction at the stake. (Below this paragraph are stills from Michael Reeves' Witchfinder General and Jesus Franco's The Bloody Judge.) These images reconnect the suffering to their purpose in the narrative: the exploitation at work is of human empathy for the depicted object--another human--exhibiting pain whether real or fictional. (In Preminger's Saint Joan the flame that engulfed Jean Seberg's face for a split second, causing her to scream, was real.) To infuse sexuality into the violent act (that is, to visibly re-infuse it); to turn the rule of authority, of the state, into a rule over bodily pleasures as well as pain. Some of the charge of the more-or-less modernist images of Dreyer, Bresson, Rossellini comes from the same place tread openly by Reeves, Franco, Piers Haggard, countless other schlock practicioners. The ingenuity with which a film treats this 'figuration' has little to do with its genre placement or its place in the brow-level scheme of things. What is vital is that Dreyer and Bresson, though "minimalists" whatever that means, were still including shots that emphasized not religious austerity but economical simplicity. If these films are like a case of connect the dots, it is worth noting what connected the shot-to-shot. These filmmakers were not stupid men; they are arranging elements in the frame and shots in time to deliberate effect--to impart something about the social order in which these women suffered, something about the corporeal, emotional, kinaesthetic experiences amidst the trappings of Law (produced by a chirographic society, with exegesis & rhetoric). These films are nothing if not palpable. If the exploitation film is sometimes more direct than the art film, it does not follow that it is always more honest or even more forthright about its sources. Rossellini, too, in making his spare, simple images, was trying to illumine an entire social order--his vision of "Man" in time and space--by means of ostensibly a few elements. The complexity, though, adds up from concept to concept, gesture to gesture, shot to shot, sound to sound, very quickly. It is because the elements these particular master filmmakers (D, B, R) have chosen to use are those which are so fraught with meaning, so ... elemental. They are also the raw material of exploitation.

My friend does TV work. He was on Wil and Grace. He played a rabbi, who had a speech to give to the congregation. He was angry, when he saw the episode on TV, he didn't have a close-up. In hollywood people live for their closeup.

Close-ups are a strange thing indeed--on one hand, as you point out, they can be a key narcissistic (or self-promotional) goal for an actor. At the same time there are theorists who've suggested the close-up is so vital and powerful a possibility in cinema precisely because it draws in the audience--perhaps as though it's them, and not so much the depicted object, that "makes" the close-up.