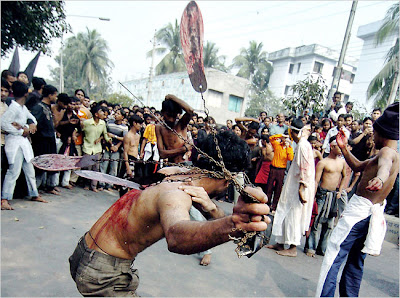 (Photograph: Farjana K. Godhuly/AFP -- Getty Images)
Let us recall that it was some of the great Islamic cultures that kept alive "our" Western antiquity; it was Islamic states that tolerated Jews and Christians (fellow religions of the Book); it was Muslim philosophers, scientists, statesmen, humanists, etc., with whom "our" European ancestors communicated and exchanged ideas. What we talk about when we talk of any religion is not a set of doctrines but a set of human, historical practices that produce the doctrines, over time, via collective and traditional intelligence rather than individual, logical intelligence. As such it is one of the great emptied-out truths of our media age that Islam, like every religion, has its "pros" and "cons." This is absolutely true, but it is emptied of its real truth because of its political function in media discourse, because the mixed bag that organized religion inevitably is gets stretched and distorted this way and that. We posit extremes, a polarity: there is "good" Islam, and then there is "bad" Islam, a perversion. Our politicians and media stress to us ad nauseum that these things exist in the thinnest possible sociopolitical context. By convincing enough of us that there is a mutation or perversion, a late predominance of the bad type of Islam, our owners basically cut out our feet from under us. They rob us of thinking of religion(s) in the historical and sociopolitical totality, of rationally coming to terms with the facts of a religion's goods & ills as a broadly cohesive set within global reality, and think of it instead as a kind of cancer, with mysterious origins from beyond, that can and should be kept at bay, and probably also attacked before it can spread.
Of course there are patriarchal and brutal theocratic regimes that have emerged (then and now) in the Islamic world--just as there have been in Christendom. This is the nature of mass, organized religion: beyond debating their truth content, clearly they are a form of social coercion & cooperation. No intelligent person could argue otherwise, one can only argue that these forms of social organization are beneficial and desirable. I think organized religion is very harmful in the long-term and on the macro scale, but can have a great deal of benefits in the shorter-term and on the scales of community, family & individual. Islam, like other religions, has its mystics and its mysteries, all its amazing human beauties--like Sufism, or the drums of Bedouin tribes. (In fact, most religions of civilization are at their most beautiful when they have aligned themselves to much older spiritual practices.) Islam has its relationship with bloodshed and pain (like Ashura, pictured above), as do other religions, because we must come to terms with sacrifice and with death. These are all common knowledge things that are just being blanketed over by the dominant framework of the liberal-hawks, like the worthless Martin Amis.
Posted by ZC at 10:08 AM

Hey! I'm glad that you mentioned the Sufis here. Last year, the BBC noted that the most popular poet in America is the 13th-century mystical Muslim scholar, Rumi! (Right now, as these wars rage?) I am certainly biased, but it is impossible not to ponder that maybe the opposite of war is . . . poetry . . .

I didn't know that, Jen. I've read very little Rumi, myself, but honestly that's something I should remedy. (I should have remedied it long ago...) Thanks for the info!