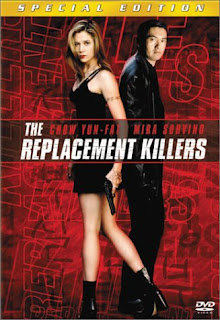 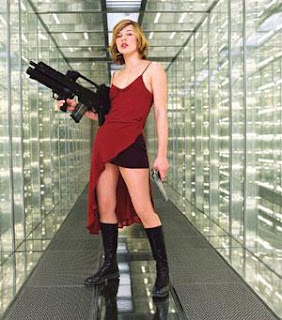 I haven't seen it since its release, nor did I keep up with the sequels, but I thought Resident Evil was a really fascinating movie, for the ways in which it handled 'the image' and the idea of 'textuality.' (At the time, I was both in a phase of my cinephilia when I was trying to "figure out" Hollywood and get a good, definable grasp on it, and it was also around the time I got my first serious doses of continental theory--Baudrillard, the simulacrum, oh snap!) Six years later, I am--I hope--less inclined to slobber over the appearance of a film for merely demonstrating the Cliff's Notes version of a pomo guru's most famous book. Still, the memory of Resident Evil retains its positive associations in my head: at the time I thought it was a solid genre film but "updated" in the way it was formed, in the way it formed images that were pure and whose indexicality seemed a footnote at best, the way it referenced its ur-text (the videogame I never played) rather than seemingly adopting it. (Oh, perhaps I still think the exact same thing about it now that I did in '02--I'm just less easily impressed by my assuredly quite brilliant interpretation.)

Why do I return to this particular film? It's not really to reminisce on a younger, more innocent me. I'm instead looking at it as a periphery or a tangent on something else that interests me at the moment--the melding of certain national or regional 'influences' in contemporary action cinema. I'll save my main thoughts on this for something in the future. But I want to point out that the iconographic similarity of Mira Sorvino in The Replacement Killers ('98) and Milla Jovovich in Resident Evil has, I think, an interesting and oblique history. In Antoine Fuqua's film, which came as part of the HK-US talent-money cool fusion of the 1990s, there is the barest semblance of 'character' to Sorvino's "style" (dirty blonde, dark clothes, skin, hip boho hi-tech criminality)--she is given motivation and a history of some sort, and her self-presentation comes from somewhere suggested inside the extraneous "world" of the film-narrative. But while it's history, while it is character development, it's pretty thin (as is a lot of the HK cool), and intentionally so.

What happens with a very similar "look" in Resident Evil is that it seems to manifest primarily to satisfy an ideal: no history but the realization of an image. No 'causality,' but the conditioning of the onscreen content to the demands of the world outside the vacuum: the image of cool, the image of the girl with the gun, an exemplary image of a perfect (unrealizable) image. I will have to see the film again to really decide if this is the case, or if memory has warped too much. These are preliminary notes.
Posted by ZC at 9:42 AM

Did you read the Resident Evil articles on Jump-Cut?

I don't think it has much to do with your main thoughts (it goes on about the female, racial, and "post modern" aspects of the movie) but it does talk about "kick ass heroines" and how they are possibly "figurative males."

I don't dig on no Baudrillard (due to slightly different reasons than those that characterize my wariness of somebody like Heidegger) but, regardless of that, I think the _Pirates_ movies do a lot of what you're talking about in _Resident Evil_ -- and way better. Still, I haven't seen the video game movie since theatres, either. And I've been watching the theme park movies (at least the sequels) a lot in the past year...

Jacob, no I didn't see those--thanks! I'll have to catch up on the sequels sometime soon.

Ryland, I think I saw the second Pirates sequel. (But I can't remember it. I'll have to look up plot or screencaps...) Perhaps sometime down the road we can do some complementary ResEvil/Pirates blogging and the way they deal with image and medium?

I posted at my blog a reprint of Louis Proyect's initial review of "No Country for Old Men,"

RE--I haven't seen Grindhouse yet; I think I may have read Proyect's review already (but then I may well have forgotten it completely, my memory's so bad), but I'll drop by your place this evening and catch up on the new stuff.