The Moment of Death

My impression is that the general direction of the pans in The Passenger are from left to right, those that don't follow action at least, though I will have to check diligently to be sure. Whenever the camera moves over to an 'abstract' space (a wall, a landscape), ignoring the human figure that had been in the frame initially, it is as though the camera is reading the material of the image it is creating, that is, analyzing its framing as it simultaneously records (L to R). In the scene immediately before the one illustrated below, Locke is stuck in the desert, slumped against his sand-trapped vehicle, and the camera moves slowly away from Locke, even slowing down over one visual patch as though parsing a rough phrase, to read the red desert. It is as though the human has been read out of the material. This is not a revolutionary thing to say about Antonioni, I realize. I'm just reflecting and trying to set up a few foundations off of which to build.

In the shots leading up to the demise of the truck in the desert--before the L-to-R pan that leaves Nicholson's body high and dry, we do get R-to-L actions: a pan that follows the truck itself as it is zooming through the dunes; the play of sand thrown out from under the spinning wheels; the shovels of sand we see coming from behind the vehicle's profile as Nicholson/Locke tries to dig his transportation out. 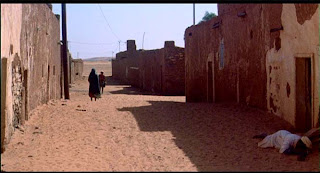 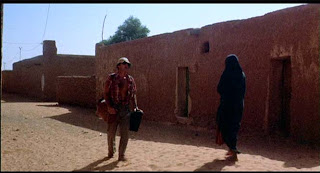 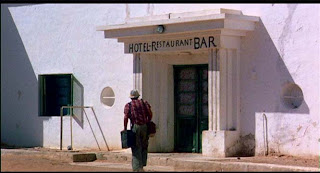 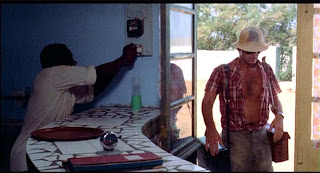 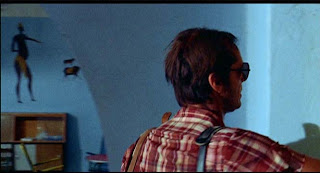 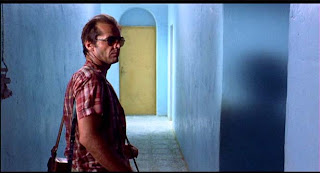 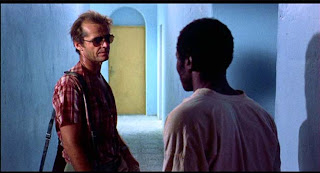 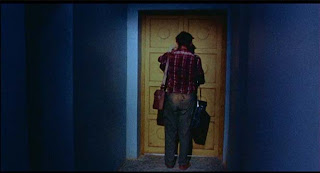 In the shots represented above, we mostly see a movement from left to right, with Nicholson's body crossing in front of the camera. This is not a literal and schematic application. For example, the images of one and two are the first two shots of the sequence of Locke's return; they are like a soft or weak jump cut, really. Only through the second cut does he pass the camera--"us," readers--and continue in the third shot to the door in shot three, echoed slightly in the camera placement of the final shot illustrated here (which is shown by the last three frames).
* * *
"Like Blow-Up, The Passenger affirms the impossibility of seeing the crime in the present. Here the moment of transition from the living to the dead body is concealed, maintained offscreen through a complex camera movement that traces a hollow space, installs a void in the center of the scene, and empties out vision from within. The camera, and the spectator with it, sees from this groundless position, this invisible space in which somebody is dying. Through a complete reversal of perspective, the vanishing point, the point sanctioning the disappearance of the scene, is being projected all the way back to the viewpoint and even behind it."
--Domietta Torlasco, "Undoing the Scene of the Crime: Perspective and the Vanishing of the Spectator" in Camera Obscura 64, p. 104.
Posted by ZC at 6:30 PM

Nothing you haven't read in the following Brenez quotations (both from 'The ultimate journey'; I just like them is all:

"This is the reason for the privileged attention accorded by Deleuze to cinemas of anthropological decentring - Welles more than Ford, Dreyer more than Lang, and even Antonioni more than Rossellini, the latter putting humanity where Antonioni effaces it - those stylistics that work inside and outside the human figure, indeed against it, in the greatest suffering, on the signs of its viability or of its impossibility of being, on the signs of its disappearance and of its return."

"Thus Alain Bergala's work on Voyage in Italy or on Antonioni's first features shows how the real suddenly seizes the film, blindsides it [le sidère] in spite of what the human figures [les figures] expect and lead us to expect, according to logics of irruption (Rossellini) or of effacement (Antonioni) which extract the characters from the narrative and transform them into subjects of history (of the human community in Rossellini; of the war in Antonioni)."