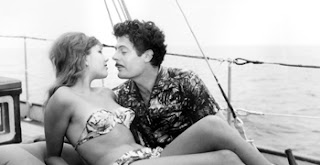 Four legs, two legs, three legs--on time and the procession or sequence of desires. Generic desires may change but don't age, do they? Marcello Mastroianni loves nubile Stefania Sandrelli, but the camera shifts and her feet show us where her heart lies. So the channeling of desire goes. (Genres live on--"more of the same"--because desires don't go away, including the desire to see a form implemented, a narrative retold, an itch scratched.) What's a genre? A series of tropes, or (go visit Ryland for more of this) a medium in itself, to be played with and worked out. Insofar as genre exists, and insofar as a genre has rules (e.g., that pomo marketing gimmick that makes me cringe 75% of the time it's used--"this work subverts its genre"), the rules are like those of a game, a sport: we know what we're going in for, there are some things we expect to see, some things we expect reasonably not to see, and sometimes we're suprised, and we're moved or perhaps not, and that's that. We'll partake once, we'll partake again. The rules of genre certainly don't seem to operate like regulations or doxa ...
Posted by ZC at 7:11 AM

I just saw Seduced and Abandoned last Tuesday. Germi's film was not the comedy I was expecting, but an attack on a male dominated, and not simply Italian, culture.

I haven't seen Seduced and Abandoned yet, in fact I just missed the NYC Germi retrospective (busy, broke--still a damn shame on my part!). But yeah, Germi's not at all just some sexy-fun hack, is he?