Made at Cinecittà, Sometimes 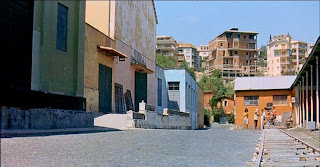 Of late it has been Italian cinema on the mind. Why? I can't say for sure. I am writing a paper on Rossellini's late historical films, but firstly, I was already very interested in those, and secondly, my return to that topic was more of a result of interest in the larger (national) field than vice versa. I've been watching films that have far more limited reputations than the work of the tried-and-true Italian masters (Fellini, Antonioni, Visconti, Pasolini, Bertolucci, and so on--you get the idea). So, I've watched a few half-forgotten 1970s sex comedies (Dino Risi's Sesso matto, Luigi Comencini's rather good Mio Dio come sono caduta in basso! aka Till Marriage Do Us Part), Risi's minor classic commedia all'italiana, Il Sorpasso ('62), a couple others. There seems to be comparatively little scholarship on these kinds of films, small classics or forgotten masterpieces as well as the run-of-the-mill flotsam and jetsam. So much writing on Italian cinema, in English at least, seems to focus on a few major issues (Neorealism, the 1960s art films) and personalities, and I suspect there's a chicken-and-egg issue with regard to the submerged works of the white telephone films, and the writer-directorial(-sometimes-actorly) work of Nanni Loy, Risi, Comencini, Monicelli (Big Deal on Madonna Street aside), Luciano Emmer, Germi, Bolognini, Lizzani, De Seta, Sordi, even Petri and Scola. Even Nanni Moretti is barely represented in our theaters and our home viewing formats! Genre/cult films from the 1960s seem to be on the right track, but I'd like to see more out there in this amazing marketplace where everything is (supposedly) available. I understand that polemics submerged a lot of quality and/or popular classical French cinema, especially pre-New Wave; but what precisely did the same for the Italians?

As I noted in a comment below, I had to miss the recent Pietro Germi (partial) retrospective here in New York, so to an extent the blame falls on myself for not partaking in the bounty. I don't plan on missing much De Santis, though.

On the European Film Review forum there's a fascinating old discussion about certain shifts in the aesthetics of commercial Italian film in the 1950s.

This all said ... if anyone can help me track down a video copy of Rossellini's L'Età del ferro (preferably--very preferably--with English subs) I would be much obliged. I'd love to see it, especially if I could do so in time for the paper. 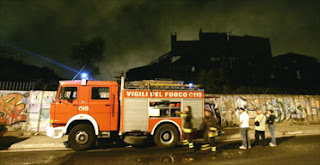 Genre/cult films from the 1960s seem to be on the right track, but I'd like to see more out there in this amazing marketplace where everything is (supposedly) available

Agreed! I've found that it usually takes a somewhat popular book like Pete Tombs' Immoral Tales or lots of press in magazines, chatter on film boards, etc. to spark interest in particular genre films which leads to them getting released on DVD and the bloggers writing about them, etc.

A book about Italian sex comedies for instance would probably spark more interest in the genre.

I'm personally really interested in Italian spy films and unusual heist/crime movies, which are often incredibly hard to get a hold of. Of course, if I could understand Italian I'd be better off since some things are available on DVD in Europe without subtitles.

I'd also love to see more gialli get released on DVD, but the market for it seems to have hit a dry spell. Hopefully that will change soon.

If you're able to get your hands on it, Jacques Lourcelles' DICTIONNAIRE DU CINÉMA has some great things on Comencini and Risi (what he writes about Comencini's PINOCCHIO and INCOMPRESO should certainly be placed right up there with best stuff ever written about this director). There's also very good stuff on Freda, Monicelli, Scola, Cottafavi, Matarazzo, Nanni Loy, and even a very positive (if small) review on some films directed by italian actors. He places the works of Sordi, Gassman and Tognazzi very highly.

Hey Zach, I;m kind of late visiting your site. One of the films I wish was made available on DVD is Omicron by Ugo Gregoretti. He was the "G" of RoGoPaG. I saw it at the New Yorker theater around 1971 and thought it was hilarious. Of Rossellini's late films, I've only seen Blaise Pascal and Rise of Louis XiV which I loved and saw twice theatrically.