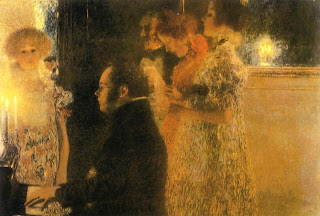 "[The crisis of language in classical modernism] was usually treated in isolation as an emblen for the aporias of literary modernism in general: the inability to carry on a literary tradition, the difficulty of securing a place for poetic language in a disenchanted world, and the failure to communicate in a way that gives lasting form to the chaos of life. These aporias in turn triggered the fervent desire for transcendence in some hermetic "other" language (Hofmannsthal, Rainer Maria Rilke, Kafka) and it led eventually to notions of a literature of silence, or more recently, of unrepresentability." (Andreas Huyssen, "The Disturbance of Vision in Vienna Modernism" ... note the use of the word "hermetic," clearly having nothing to do with Hermeticism per se, but a nice congruence all the same.)

(Ruiz recently made a film about Klimt (I have not yet watched it), and of course Ruiz made one of the very greatest films about general obstacles to and breakdowns of communication--On Top of the Whale.)

"Carl Schorske has shown how the newly wealthy middles class of Vienna came to occupy the urban development called the Ringstraße that had been built in the liberal era of the 1860s and 1870s and that is often compared to Baron Haussmann's Parisian boulevards. The Ring was a wide, circular swath of land that had formerly served as a fortification of the old city and its political center, the Imperial Palace. ... The circular layout of the Ringstraße was visually directed inwards, toward the old city center, and thus it still served as a kind of fortification, now in a social rather than a military sense. ... Early cinema in Vienna arose exclusively in the Vorstädte [working class & poor neighborhoods], together with other new forms of mass leisure activities (cabaret, soccer fields, popular gastronomic sites, entertainment parks, etc.). As the Vorstädte expanded quickly into formerly rural areas, rural modes of an oral culture with its illiteracy blended with technologically new forms of urban culture such as the cinema. In a short essay on film from 1921 entitled "Substitute for Dreams," Hofmannsthal explains the success of the cinema in Vienna's Vorstädte by citing the masses' fear of language, particularly in its written form. ... The oral and the visual thus stood against the scriptural, and if one considers further that much of the population influx into Vienna came from the outlying and non-German speaking areas of the empire, one gets a good sense of why the German-language writers felt increasingly embattled, and why language became such a central concern in Vienna and not in Berlin or in Munich." (Huyssen)

Remember that to understand alchemy, we first must closely consider the competition between Aristotlean natural science and NeoPlatonic natural science in the Renaissance. There was (and is) far too much written that percieves alchemy and, by extension, hermeticism as entirely divorced from that great philosophic debate of 1300-1700 (after 1650 or so, both natural sciences were definitively destroyed and buried by Baconian/Cartesian natural science). Of course, both versions of natural science were parts of very developed and comprehensive philosophic wholes.

Very true, thanks for the admonition.