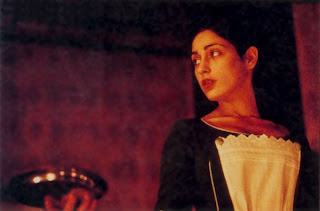 New Yorkers: one of the greatest narrative films of the decade so far (what compares?--No Quarto da Vanda, The House of Mirth, Before Sunset, maybe some Hong Sang-soo and Le fils) is coming to a local screen tomorrow. Esther Kahn at the Museum of the Moving Image (142-minute cut which is what's on the R1 DVD), followed in the series by Bergman's Summer Interlude. Myself, I may or may not make it out to the film, which I've seen more than once, on screens big & small, but if you don't have tickets for the Guerin film at NYFF, then perhaps you owe it to yourself to see Arnaud Desplechin's greatest work to date.
(I think I will never cease to find it strange that Desplechin found his biggest hit to date with the US cinephilic audience in Kings & Queen, a good film but his weakest one too, as I see it. What's strange is that Kings & Queen is not really a departure, stylistically or thematically, from his previous work. It's jumbled, narratively loose, full of odd mixtures of tropes & acting styles, i.e., all the things that ostensibly made his earlier films coterie favorites at best. Yet when Kings & Queen was released here it made something of a splash. I just don't understand why, why it was that film that did it. Shoulda been an earlier one, frankly.)
AD's top tier: Esther Kahn
Next: La Sentinelle, Playing in the Company of Men, Comment je me suis disputé ... (ma vie sexuelle)
Third: La Vie des morts, Kings & Queen
Posted by ZC at 10:22 PM

And Guerin's IN THE CITY OF SYLVIA, which will probably end up being his most widely seen film in North America, is the least impressive of his five features.
I will be curious to hear your thoughts Zach -- this one was a crushing disappointment for me.

Gabe, you're the first person I've come across who hasn't liked the film! I haven't seen it yet--only one NYFF screening, and not a good time for me--and look forward to seeing what all the talk is about at least.

I will try to see Tren des sombras in the very near future.