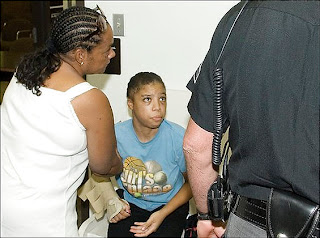 "Carmen Williams said she wanted people to know what her daughter [Megan Williams] had endured."

Read this.
And this. To what extent are bloggers ethically obligated to speak up about certain issues? (And not every blogger fits into the category of navel-gazing teenage livejournal diarist or grassroots quasi-journalist, even though this is what all the hype about "bloggers" seems to indicate in the mainstream press.) Probably nobody expects someone who blogs about, say, the corporate world, obscure free jazz recordings, or collectible action figures to interrupt their regular programming and write a post on the Jena Six, or Megan Williams. But what about a blog like this one, with pretensions (ah, more gently now: aspirations) to periodically address very real issues and events of power, and the media? Nobody comes here for news or commentary on POC issues, or radical/progressive issues in general. And yet, Ilyka Damen points to something important here--that is, if you've set precedent for stirring the pot in one way, let's say "the pot" of power structures, the feared race/class/gender matrices, you've built a certain amount of ethical expectation and obligation for yourself. (For my part, I think I've set up these expectations numerous times, and subsequently I've failed at this...) If you've got time to comment on the University of Florida student who was tasered, for example, there's no point in making excuses for not also adding your voice--or pointing clearly to others'--to the movement for justice for the Jena Six, for Megan Williams, for the six lesbians from New Jersey who are still awaiting justice and probably won't get it, for a lot of other struggles that may not be centered on the subject position of white middle-class people who get the short end of the stick from the law (like the UF guy).
(And speaking of which, I'm still figuring out how exactly I feel about the reports of this $1.5 million Duke Innocence Project ...)
Posted by ZC at 7:21 AM