Hour of the Furnaces 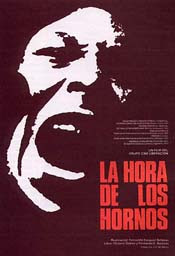 I wonder what it would have been like to see this film (which I've waited a long time to see) the way it was apparently intended by Solanas & Getino--that is, with debate, discussion. This is one of the biggest problems with the spread of 'political' film today: its neutralization in the social act of seeing the film. Sure, there's always the chance to impress someone at a party with anecdotes about the four-hour Argentinian anticapitalist film you saw, but if it's not showing up again at a screen near you ... then what? And the surge of home screenings, for groups of people, of various Iraq or anti-Bush documentaries is better than nothing; a step forward. But what of the actual discussion amongst strangers, really disparate people potentially, in theatrical venues?

Whose blood didn't boil throughout parts of this film? Isn't the point to channel that energy somehow? Even almost forty years later, it's still got something to it ...
Posted by ZC at 10:07 PM

I was wondering if they were going to stop and debate the film. I'm rather upset that I missed it, I had been planning on going for a while and then stuff came up on yesterday and when I looked at my watch it was a half hour after the film had begun.

Did you catch either of the Santiago Alvarez programs they had?

Ted, there were intermissions, but it was clear that there was going to be no debate, no discussion: not official or spontaneous. There never is (and I'm as guilty for this lack as anyone).

Of course, the best time for the debate would have been after the second section, which is the longest (120 min) and driest--and that's when Anthology decided to turn off the A/C, so the whole audience was sitting in this hot, stuffy theater with a layer of sticky sweat about us. Through no fault of the film I would have slumbered, myself, had it not been for a very strong Vietnamese iced coffee I'd had just before the screening.

I had to miss the Alvarez programs, sadly, though I want to catch more of his films (I've only seen two). I've been very busy lately; Furnaces was a special setting-aside of several hours!

this film was the first thing that came to mind while reading the discussion on your recent debray post.

anyway, how can that energy be channelled anymore? not that i think nothing can be done, but this kind of reflection brings something of despair.

funny you should say that. i came back a couple of hours ago from a lecture titled something like "for a imageable [? not sure about this word], experimental and affective philosophy" — by the writer of a book called "the cinema thinks" (which i don't think is a new notion for most of us). what is philosophy and why is it distinct from film? i'm reminded of an analysis of the addiction where nicole brenez states that the protagonist "symbolically exhausts every option of western philosophy"...

personally, i hope that question can be answered at the level of the quotidian, of life choices, of religious experience etc., because — even if that continues to be our aim — it is not possible to depend on the enlightenment and mobilization of the number of people it would be necessary for, let's say, a 'revolution'. what do you think?

I want to see this film, thank you for the review