I've seen, I think, seven Straub/Huillet films now (shorts & features), but not until last night did I have a reasonably optimal screening experience--projected on celluloid, the print was decent, the theater acceptable, and I wasn't suffering from any lingering colds or exhaustion. I have a weird track record where I show up to the couple's films very tired after a long day, or having come down with a bug, attending the screenings at all only because of their rarity. (Later in the evening, during another film, I admit I started to yawn and slouch over--the body wasn't cooperating!) Sicilia! may be greater than other S/H films I've caught, or maybe it's simply benefitted from having a fair and proper go-round. All of the S/H films I've seen have been good, interesting, even great--but this one hit me very, very deeply. 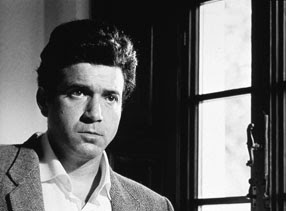 As I hope to teach film one day I would love to show the sequence (at the end of reel one and the beginning of reel two) when Sicilia! becomes silent--just after the train car conversation, before Silvestro reaches his mother--and we just see a few tracking shots from the train. These tracking shots and pans of the Sicilian landscape (they reappear a few more times) are breathtaking, and the one from the train (with Mt. Etna, I believe?) would be a perfect comparison to Robert Breer's great film Fuji in a class ... to show how the static integrity of a b&w Straubian image compares to the dynamic fluctuations of Breer's photography + animation--how both achievements are great in their own ways, how they may work in tandem to express something about perception (in this case, the simple act of looking out the window from a train ride, with an important mountain in the distance) and even cognition ... Breer's images articulate (among other things) the way the eye creates an conception, or a conceptual image, out of disparate and conjoined images; I think S/H's indicates something about constancy versus change (the implacable lonely peak in the background, the rapid movement of the Mediterranean brush in the foreground). Straub and Huillet are ("they" were) filmmakers who delight in words, in conversation: they may be called dreadfully boring or any number of bad things, but "empty" formalism is a battleaxe no sane person can charge them with. And it's so refreshing to see these meaningful, anti-verisimilitudinal conversations laced together with shots of landscape. Powerful and intelligent images, great natural beauty, the establishment of human contact as monumental as the sensual consideration of terrain of countless generations (and gods) ...

I don't know if its their best film, but it's certainly a great one. But I'm partial to it, because it is the Straub/Huillet film I've seen the most times (it got a brazilian distributor, so it played for a couple of months back in 2000 and shows up on retros sometimes).

Yeah, rationally I wouldn't really make any case for it as the best Straub/Huillet I've seen--it's just the one that had a good atmosphere for its reception.

Fascinating that it is relatively available in Brazil--it's pretty scarce in the US. (I think last week's screening was the first in NYC since it showed at NYFF '99.)

Sicilia! won the Critics prize in the São Paulo Film Festival in 99, and Leon Cackoff the festival organizer who is also a distributor/exhibitor decided to bought it, from what I understand no winner had gone without a distribution before, that is until the three years were Ruy manage to influence the critics reunion toward one of his faves andyou got Vai e Vem, Tropical Malady and The World, all of which went without distributor). Cackoff even released Sicilia on VHS, ewhich I suspect means brazil is the only place one can rent a Straub/Huillet film at Blockbuster.