On Libraries and Galleries 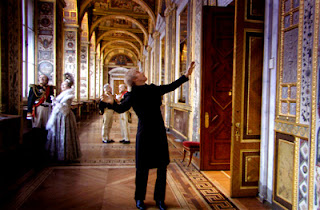 The sweep of history. All these paintings; all this art; all this culture. All this value.

"Nothing perhaps increases by indulgence more than a desultory habit of reading, especially under such opportunities of gratifying it. I believe one reason why such numberous instances of erudition occur among the lower ranks is, that, with the same powers of mind, the poor student is limited to a narrow circle for indulging his passion for books, and must necessarily make himself master of the few he possesses ere he can acquire more. Edward, on the contrary, like the epicure who only deigned to take a single morsel from the sunny side of a peach, read no volume a moment after it ceased to excite his curiosity or interest; and it necessarily happened, that the habit of seeking only this sort of gratification rendered it daily more difficult of attainment, till the passion for reading, like other strong appetites, produced by indulgence a sort of satiety." 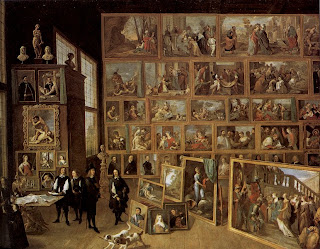 
"On all sides am I surrounded by a shameful video collection — too many hours are stored in these tapes, too many squibs, too much life. My collection is vast and fulsome: I have little need to watch La Venganza de los Narcotraficantes, but I have it, which is half the battle, and, having it, the battle needn't be completed. I read Walter Benjamin's Unpacking My Library: "The collector's passion borders on the chaos of memories" — I cannot bear to look at my collection anymore, for they represent not films but the squandered hours spent watching them. Revisiting them is a horror, so I shut them away — yet since they contain my essence, my hours, stolen away as a tribesman's soul is snatched by a Polaroid, I am in fact shutting myself away, burying remorseful hours too painfully vicarious to relive. I am an idiot."

Films--no aura, a single print is rarely that valuable as an item on the market, a videotape even less so, but (especially after home video & the digital age) they can be collected like paintings or other images. A painting by a big art world figure usually costs relatively little but can command huge sums; a feature film usually costs hugely but its price is dispersed among its public. There is no owner of the film as an artwork outside of its material; we are all potential owners of reproductions of the film. On the consumer end of cinema, the genealogy stems not from the commissioner or buyer but the collector. Is film its very own 'museum without walls'?
Posted by ZC at 7:45 AM

I wish my husband could appreciate these sentiments on collecting, but it is more the act of acquiring something one instills with value that appeals to him and many others than the object itself.

The lead photo reminds me of Sokurov's Russian Ark. That was a film that showed the value in reviewing a collection as a reflection of the histories of the times they were created. This, I think, is one of the things I love about film--a "living" time capsule.

And I'm not surprised that lead photo would remind you of Russian Ark--it's a still from the film!

Ah, good to know! I thought I recognized it, but the background figures looked painted.

Collecting is not a bad thing. It has helped preserve some of the world's great treasurers. Packrat-ism, however, is something I have a big problem with. With my minimalist sensibilities, it's very hard having so many of his objects around. At least he gave up the 2,500 videos he collected over the years...