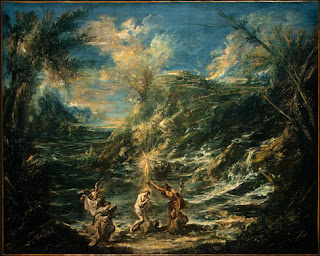 Going for quantity over quality this time around, on my last visit to Washington D.C. I hit up both wings of the National Gallery of Art, the African Art Museum, the Freer, and the Sackler in the space of about five hours. Whenever something stood out (as in the almost hyper-proto-Turneresque painting above: Alessandro Magnasco, The Baptism of Christ, c. 1740) I stopped to mull for several minutes. But mostly I sped through the museums, relatively speaking, just trying to refine my overview of what the city of my (later) teenage years still had in store. I hadn't been to any of those museums in at least a year.
* * *
Tonight I visited what must be the most delicious block in Queens, if not all of New York City. Roosevelt Ave, between 71st and 72nd. It has Zabb, where I've had many a fine meal (the best ones have tended to start at midnight with a motley assortment of byo booze, ending in calorific stupor between 2 and 3am). But this evening I also went to Burmese Cafe, the last of a certain circle of food-adventurous friends of mine to do so, where I sampled tea leaf salad, ginger salad (refreshing, thicker than I expected), sour pork & soy curry (tastes dark--and delicious), chicken & vegetable noodles (very eatable but routine compared to rest of meal), fried eel (slightly chewy, but damn good anyway), golden triangles (mini vegetable samosas), gram fritters, a curry fish dish (ohhh), and fried bitter melon. Every bite a delicious little explosion in the mouth, especially the sui generis flavors of tea leaf salad and the bitter melon (neither of which I'd tried before). Best of the rest were probably the pork and the spicy orange sauce that accompanied the fritters/triangles and also the noodles (where it was mixed with cabbage). All washed down at a leisurely pace with some Red Stripe. Understand that I sampled these dishes, I didn't devour huge portions of them--no more than a few spoonfuls of each, which is why I was able to try so many things. I'd recommend to any New Yorkers to do the same, at least on their first trip out here.
After Burmese Cafe--which may be the only all-out solely-Burmese joint in NYC, or so I read--we decided to hit up UFC, Unidentified Frying Chickens, a Korean fried chicken joint just a few doors down from BC & Zabb. Ordering a small order of spicy wings & drumsticks for six of us (a little more than one piece per person) was a fantastic dessert--if you like dessert meaty & spicy, that is. And dessert or no, it was pretty delicious. Best Korean fried chicken in the city? Probably not. (One in our party at least had a preferred place in Koreatown.) Great fried chicken in Jackson Heights? Definitely. (Note: the place has a definite "chain" vibe and I would probably not order anything on their menu aside from the chicken and radishes, save maybe the sweet potato fries, which looked tempting.) But the fact that the storefronts to Zabb, Burmese Cafe, and UFC all exist on the same twenty yards of sidewalk is pretty incredible. It is to inexpensive NYC restaurants what Bergman & Antonioni's close-together deaths are to film culture: something extremely rare which should not go unnoticed.
* * *
Speaking of Bergman & Antonioni--yes, I still do want to post about them. But I should remark that I actually have a very "troubled past" with Bergman. I respect him as an artist and historical figure of course, but, truthfully, I have a low opinion of some of his major films (Persona especially), and because of this low opinion I have not been very good about seeing very much of his prolific work. His unfortunate death is giving me a reason to reconsider his oeuvre, try to be generous about it, try to re-examine my opinions (check old conclusions, scout for unwarranted prejudices). This need for re-examination is also because a lot of people whose opinions I respect have great esteem for Bergman. Antonioni poses this problem a little (just a bit) as well--though I feel much more personally aligned with his work than Bergman's, even if I feel like, say, Blow-Up too is not so great a film--so I just wanted to set the stage for my (hopefully) forthcoming examinations. But neither of these filmmakers, giants though they were & are, move me to the same extent that, say, the hypothetical one-two punch of Godard and Rivette's deaths would move me.
* * *
A quick food question to any readers--how do you pronounce 'lychee'? According to dictionary.com it's lee-chee, but I know a lot of people who say lye-chee. Some of these lye-pronouncers are East Asian and have even held this over me as authority on the matter--but I learned lee-chee from some Vietnamese girls I befriended in high school who used to keep it in their lockers and pass it around for snacks between classes (which is when I first had the fruit), so I've never been convinced. Just today it came up again so I'm confused ... (Actually, I did a little basic Googling and found this, which seems to explain the matter. But I would have guessed Vietnamese people would have had a pronunciation closer to the Cantonese rather than Mandarin? So I suppose this guess would be wrong? Aghh ...)
Posted by ZC at 10:38 PM

It is one of the weirdest things in the world that both Bergman and Antonioni died at nearly the same time. Perhaps it was destiny. The only Bergman I've seen is Persona, and I hated it when I first saw it - though I was mesmerized by its cinematography - liked more and more after repeated viewings and readings, and now feel just about ambivalent about it. Mainly because it's no longer appealing, sort of hokey, and - perhaps I'm making a mistake here - was outdone by Fassbinder's The Bitters Tears of Petra von Kant in terms of dramatizing people's relationships to one another.

I have never seen a movie from Antonioni and probably never will because he's really unappealing to me. Nor will I see more Bergman, since even though he was prolific his movies - and they really were his movies since what else was he filming? - seemed to be culminating towards the same conclusions. I'm just relying on my readings of them though, I am not a witness. Plus, it's kind of hard to feel motivated to watch more of him when one of the most annoying people alive, Woody Allen, is a total fanatic and plagiarizer of his work. I find Bergman completely classical, or medieval even, but his death strucked a chord with me. It felt like the closing of a chapter in the history of cinema. I don't know why he's such an authority though. Just my two cents.

"After Burmese Cafe--which may be the only all-out solely-Burmese joint in NYC, or so I read--"

There were two joints called Mingala in Manhattan that I believe were purely Burmese. The one on the Upper West Side is gone, I think, but the one on E. 7th St., near McSorley's, was still in business as of a few months ago.

Anonymous, how can you be sure Bergman's films are culiminating toward the same conclusions if you've only seen one? Just playing devil's advocate.

Dan, I'd forgotten about that place, I've actually considered going there many times (never followed through).

re: Lychee. Part of the confusion is due to dialects. In Mandarin, it is pronounced lizhi (li is prounounced "Lee"; the zhi is more like the "Ge-" in German). In Cantonese it is prounounced lai-chee, which I suppose is how it got its more popular pronunciation in the US (plus it's easier for Americans to pronounce than the Mandarin). Pronouncing it "Lee-chee" I suppose is splitting the difference.