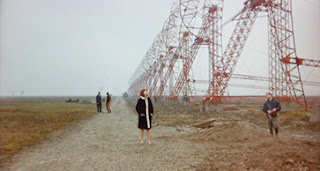 It's Red Desert that opens with Monica Vitti acquiring food for her son, right? I'm not misremembering films, am I?

Pedro Costa's No Quarto da Vanda strikes me as one helluva masterpiece. O Sangue and Casa de Lava are promising films; but Vanda is something very strange and rare. Better than Colossal Youth even?

The lament of civilization's destruction, i.e., change: mischaracterized in a bad political gesture by a great artist in Manoel de Oliveira's A Talking Picture (somewhat sabotaged by John Malkovich, whose presence I can't yet reconcile with the rest of the film). The cinema--modernity--gets analogized to the train; what's it mean that Oliveira puts his Western civilization voyage on a cruise ship?

Anyway, back to what I've been seeing lately. Occasionally in the comments to blog posts or message boards, in the wake of the deaths of Bergman and Antonioni, people will sometimes say things like, "Now that the serious days of the arthouses are over, all we have is commercial crap like Transformers." The implication is that nothing is happening of worth, as though the 1960s "were" L'Avventura and Persona and the 2000s "are" Live Free or Die Hard.

Well, among other things, Pedro Costa is happening. And there's a NYC retrospective as we speak. Ossos (which I haven't caught--tomorrow, I hope) gives way to In Vanda's Room, whose impoverished and drug-addicted protagonists are relocated into government housing for Colossal Youth. I think Vanda may be the most beautiful film shot on video I've ever seen. Costa's long, cumulative opus (structured editing doesn't seem to play a part in its impact) relies on the rich density of compacted time--it took two years to shoot (and one to edit, so perhaps there's more to the editing than I was able to discern on initial encounter), and the resulting material plays for a definite period of time, that is, we can sense what has changed in the community from beginning to end, but I don't know if we're really able to figure out how long the narrative takes. There's no narrative "anchoring," in fact, during parts of this film I thought to myself that I had no idea how far along into the running time we were--a sensation I haven't felt since I watched Tony Conrad's The Flicker! Georges de la Tour-like lighting makes for some of the most eye-popping scenes, where yellow-orange candlelight casts only the barest, starkest warm light in a field of black as the junkies shoot up and ruminate on the impending destructing of their neighborhood, Fontainhas. I'm fairly squeamish, too, and though I don't have a particular problem with needles, heroin has always kind of freaked me out, so watching some of the scenes was very, very difficult--yet their matter-of-factness, and even their unsentimental poetry (as as in one of those de la Tour-like scenes, when one junkie is trying to find a neck vein on another and unsuccessfully attacking it with an old needle), ground these passages in something almost primal: the needs of people who are trapped and yet aware of their traps, and to some extent acceptant of them: "This is the life we choose." It is, and it isn't, and Costa's film--showing individual behaviors and juxtaposing them with the encroaching outside demolition of the district--captures this dialectic. It's very moving, very terrifying. And in its own way it (and Costa's other work) contributes to my personal lineage or network of decaying Western(ish) civilization, too, the intertwined destinies of buildings and ruins and development and human beings of differing classes--there's a great lecture series or college course to be formed out of some or all of the films I've mentioned in this post, I think ...
Posted by ZC at 10:45 PM

Lovely thoughts on In Vanda's Room Zach. I was also devastated by it, and think it may pass my estimation of Colossal Youth.

Still, I find it somewhat sad that a film like Casa de Lava seems like it will inevitably be left behind in the context of writing on a director whose work has taken such a radical turn. I feel like it may eventually just be one step in Costa's "progress" to the cinema starting with In Vanda's Room. Left by itself, I find Casa de Lava pretty close to a masterpiece. In fact, thinking on it now, it is interesting in the way it seems to somewhat frame and foreshadow Costa's "story" of becoming interested in but conflicted by the Fontainhas slums, if we can take the islands as an analogy to the Lisbon slums.

I will be very interested to see your comments on Ossos after In Vanda's Room rather than before, as I saw them in order and found the sharp change really shocking.

I probably need to see Casa de Lava again, and I'm very much looking forward to seeing Ossos this evening.

"It's Red Desert that opens with Monica Vitti acquiring food for her son, right? I'm not misremembering films, am I?"

You're absolutely right - it is Red Desert. I know because this is the film I put on after hearing about Antonioni's passing because the colours came rushing back to me.

Really wonderful observations on In Vanda's Room (not to mention a 'Detritus Series' that I'd love to attend) - a masterpiece, I agree. For me though, more than the heroin, it was Vanda's violent coughing that I found difficult to watch/hear, and is one of the sounds I associate with the film since I've seen it...

Costa is still not quite to my taste, but I did manage to lose myself in [i]In Vanda's Room[/i] in a way that I couldn't manage in {i}Colossal Youth[/i] (where the combination of 'monumentalism' and greater number of long takes felt more distancing).