From the Mixed-Up Files of Eugène Delacroix

... the Delacroix Woman seems so frequently deflated, limp, like time is a constant siesta and one must lounge, flopped over on a couch or carried about by strong men. Of course in Delacroix there is a certain place and a role for women (uh, no comment necessary on whether it's one many would choose for themselves)--Romantic lushness, an object of golden light and harmonious colors, an image that doesn't do much thinking (and not much more acting). The functions of symbolism, the functions of allurement or invitation: these are prescribed roles of Woman in this sort of figurative painting. 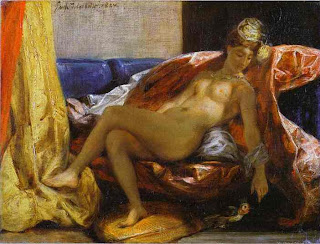 Look at the low suggested center of gravity in the painting above--the weight seems concentrated really deep in her bottom and in the center of her back, you can almost feel the pull of skin on the bottom of her left leg as it hangs across her right knee.
I will soon read Linda Nochlin's book Representing Women, which deals with relevant issues here (largely French painting 18th-20th century).

What beautiful modeling of hands on the left--not hands that hold the flag of liberté, égalité, fraternité, instead hands that are heavy, connected to arms that are tired, limbs of a body soft and pale and above all things a portrait & signifier of something quite other than the suggestion of a fully-formed subject. 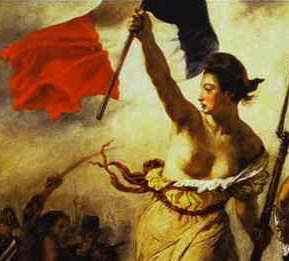 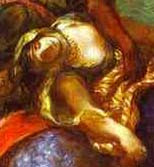 Note the common highlighting of those frequent bare breasts whether in the comatose Woman with a Parrot or the militant Liberty.
And something on the figure of Medea in the future.
(A post-script about promised content: life proved a bit too busy for me to see Manoel de Oliveira's The Fifth Empire, a fact that bothers me quite a bit as I was hyped to see it and wanted to write on it. Apologies. One should certainly stop by Chained to the Cinematheque for Oliveira material, though I imagine pretty much anyone who visits here visits there also.)
Posted by ZC at 6:55 PM