On Some Recent Viewings

Nothing special here: jottings only.

Werner Herzog's Grizzly Man--my impression: compulsively watchable, but not much more than that. Anyone want to tell me I'm totally wrong, should reconsider, and give it another chance sometime down the road? Speak now or forever hold ...

This February's Film Comments Selects series proved to be, for me, 5-for-5. No bad films. In addition to last weekend's Colossal Youth (again, more on that in the near future), this past weekend met with four viewings.

Keith Uhlich over at Slant calls Valeska Grisebach's Sehnsucht / Longing (Germany) a "Michael Haneke-lite wank job," which I can understand, but the film, which I actually liked a fair bit, put me more in mind of Hong Sang-soo, especially its coda, which performed a Hong-like move of reflecting upon the narrative as a narrative. I realize I'm not in the best position to judge, but I suspect this may have the greatest example of solo-male-dancing-alone-to-pop-music-in-European-film since that ecstatic moment in Beau travail. Thanks to Paul Fileri for urging me to catch this one. 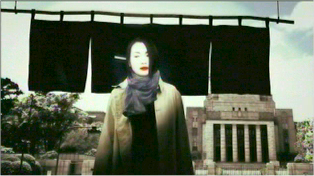 Can one love a film, consider it possibly even a masterpiece, while not understanding about 98% of it? That's how I felt after Mamoru Oshii's Tachigui: The Amazing Lives of the Fast Food Grifters (Japan), which seems to me as though the guy behind Ghost in the Shell (the only other Oshii film I've seen) said to himself, "I'm going to inject Chris Marker into my veins!" Oshii weaves together factual and fictional histories of postwar Japan. (For instance, he mentions the construction of Tokyo Tower in 1958, then discusses how Mothra invaded it in 1962...) Reflecting upon this retelling of the Zeitgeist are stories of the 'Fast Food Grifters' a very loosely connected group of people who contrive to get a free burger or bowl of soba ... and what these contrivances say about Japanese philosophy, values, and participation in material society. And it's all animated in a way I've never seen before in a feature. Totally worth seeing; definitely the big surprise of my FCS sampling. 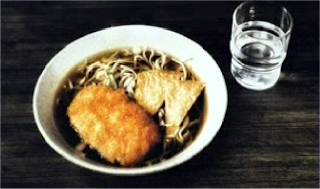 Robert Aldrich's Twilight's Last Gleaming (US/West Germany, 1977) is a rare work of tough, old-fashioned American progressivism in cinema, the sort that believes in American institutions and ideals like the concept of democracy or the office of the Presidency, but simultaneously not shying away from horrible lies (it's a kind of "faith against faith" for the States). It is most interesting, on a formal level, for its very sophisticated employment of mediated imagery and split screens.

By the time I saw the Straubs' Quei loro incontri / These Encounters of Theirs I was very tired. (I started the day watching a long soccer match with a disappointing result before rushing up to see Tachigui, Twilight's Last Gleaming, and this final one: anyway, my poor eyes were exhausted.) I had to give up, basically, on a textual level--as you may well know if you're already reading this, the film is based on the last five dialogues of Cesare Pavese's Dialogues with Leuco. (The French-subtitled film, with Italian dialogue, had faint lasered-on English subtitles above the French, which didn't make matters easy.) So I can offer not even the slightest analysis or cogent critique from my one viewing. But can I say how incredibly beautiful and refreshing this film is? Birds, streams, greenery, wind, strong and calm voices ... who says that Straub and Huillet make dense, forbidding films? This is the sort of film that invigorates you, that steadies you and propels you into a world of dialogue with fellow humans ... or immortals ... 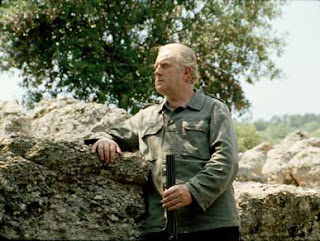 I thought Treadwell was a distant cousin of Aguirre--delusionary obsessive lost in the wilds and in his own head. Perfect Herzog fodder.

I pretty much feel the same way about Grizzly Man as you. Still haven't seen The Wild Blue Yonder though, which is meant to be more Fata Morgana-esque.

The solo-male-dancing scene from Longing (set to the Robbie Williams song) was one of my favourite 'movie moments' of 2006: He becomes a 'star' in his own narrative in this very moment, before the epilogue establishes him as a romantic-tragic-heroic character. You might be on to something with the Hong comparison...

Tachigui was a highlight for me too, I've never seen anything quite like it. The Marker comparison is a good one, I was thinking Ruiz on amphetamines in the way it kept shifting/varying tones on basically the same theme (like Love Torn in Dream).

I hope you'll seek out Oshii's Ghost in the Shell sequel, Innocence. A real mindblower, similarly "what-the-fuck-does-it-all-mean" without that mattering a whit. Some of the best animation I've ever seen: gripping, rhythmic, like a wave rushing one headlong into a psychic/psychotic abyss.

I also thought of Marker while watching Tachigui. The film's done nothing but grow in my mind -- I'm anxious to see it again, this mix of antic comedy, quiet pathos, and spirited/spiritual contemplation. Always wonderful to see anime done well: puts Oshii up in my personal pantheon with Hideaki Anno and Satoshi Kon.

And now time for Kiarostami at MoMA. Can't wait.

My Herzog knowledge is spotty. I haven't seen much as far as his documentary work goes--no Land of Darkness, no Fata Morgana ... from what I have seen the only unqualified love I have is Aguirre. And that's due for a re-viewing.

I've got to see some Barbara Albert films--too bad I've always missed them when they've come to town before.

Anyone know if Tachigui is getting US commercial distribution?

Acquarello, on a_film_by Bill Krohn once said something to the effect of, "Nobody knows if a film is bad before they've seen it. Unless it's by Jean-Claude Brisseau, in which case it's bad. And misogynistic." That still they show from Exterminating Angels sure is sexy, but on limited funds I do squeeze him in as one of my FCS choices.

Keith, the day after Tachigui I put 4-5 Oshii-helmed/written films in my Netflix queue. I'm making very, very slow progress on my anime classics. I've still only seen two Miyazaki films, I think. Hideako Anni did Neon Genesis: Evangelion, right? Jaime Christley's a big fan, I've been meaning to see those for several years now. I don't think I've seen anything by Satoshi Kon yet either.

That still they show from Exterminating Angels sure is sexy, but on limited funds I do squeeze him in as one of my FCS choices.

That wasn't very clear, was it? I meant: that still frame they show from Exterminating Angels in the advertisemenets sure is sexy, but on limited funds I don't ever squeeze him in as one of my FCS choices.

Count me in as an admirer of Innocence. There's a wonderful Dickian loop they all enter at one point, and it's hauntingly presented. Plus the theme, or at least one of them--the similarity of robot form to human, or the robot as parody of human--is more compelling than what he had in the first (something about intelligence seeking transcendence).

Yup, Anno is the brains behind Evangelion, although I prefer his Gunbuster and the whimsically tongue-in-cheek Cutie Honey (not animation, though, but its influences are clearly in that tradition).

Definitely see some Satoshi Kon. And I would personally recommend The Wings of Honneamise, by far my favorite Japanese animation. For undervalued classics, seek out Tezuka's wildly uneven Cleopatra: Queen of Sex (by the same man who did Astroboy!) and Ninja Scroll, one of the great action anime.

I'll have to say that Otomo's Akira is still a towering achievement, though.

The Wings of Honneamise is one of the first anime classics I ever read about. (There was a write-up in an issue of Wizard back in my comic-collecting days.) It isn't readily available for Region 1 though, is it?

Just seconding here. I haven't seen too much, but Oshii's Innocence is the best anime I've seen, and reminds me strongly of Godard. It's a film of non-stop ideas and discourse (and also visually miraculous).