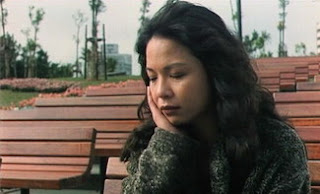 Some speculation upon the category of cinema under discussion here ...

1. The rise of the "art film" and (global?) markets for such* in the late 1950s-1960s. Italian Neorealism and its wave, Bergman, Satyajit Ray, certain New American Cinema (Engel, Cassavetes, Milton Moses Ginsberg) and the New Waves of Europe (France, Czechoslovakia, Italy, UK, Poland, etc.). Not necessarily avant-garde cinema as such (e.g., a tradition of Epstein and/or Vertov and/or Cornell).

(1a. The aesthetics of a lot of these art films--not necessarily the sumptuous works of Visconti or the audience-friendly experimentation of Truffaut--were kissing cousins to the exploitation/grindhouse genre films of the era, sharing a common aesthetic. See here. Made on the cheap, with audiences willing to sit through heretofore commercially "inept" or "unviable" dead spaces, oblique plots, mysterious allusions, the promise of philosophy, the promise of sex. Notice that very beautiful women populate both the work of Jancsó and Metzger.)

* Does anyone know of good historical sources on global art film markets and exhibition centers across the world?

(2a. Many established art filmmakers explored the theme of cinema/cinephilia's demise: Godard, Wenders. Nicole Brenez says it was simply a problem used to go on making films ... )

... but some filmmakers didn't do this. What we might call a renewed interest in feature film, "narrative" (loosely, loosely!) minimalism started to come through with a vengeance in the 1980s, I suppose. Chantal Akerman offered a superb example, Tarkovsky too in his own way, and Jarmusch, Tarr, Denis, and others were making films at this time, breaking onto the scene, instead of experiencing the condition of "art cinema" as a decay or decline (Cinema's Death), they started exploring time or repetition (more often than before as objects rather than means), even as financing grew perilous and it was all but impossible for many serious film artists to attempt a film like The Leopard or Barry Lyndon. Things to do in this case, when you don't have much money and this thing "globalization" shows how staggered the entire world is in experiencing & producing the effects of modernity and/or postmodernity ...

(Fredric Jameson has located a figure like Taiwan's Edward Yang as a late modernist for a corner of the world in many ways staggered behind Western postmodernity, and thus being a fascinating and unique sort of reiteration of a figure like Antonioni.)

(Another Taiwanese art filmmaker, Tsai Ming-liang, enacts a confrontation between the modernity of the French New Wave--Jean-Pierre Leaud has a small part in the film, which partially takes place in Paris--and the modernity of the Taipei art film. I suspect that of the "Big Three" Taiwanese film masters right now, all of whom engage deeply with history, Tsai may be the one who is most concerned with the history of aesthetics and cultural forms. Just a proposition, not a considered conclusion.)

In the past few decades a man or woman with a movie camera may have wanted to:

1 - pare down, take inspiration from those independent minds before you who didn't have much money either
2 - cultivate an aesthetic out of these "subtractions"

What's missing? This is the operative question often directed with negativity or bemusement at the likes of not only Claire Denis and the filmmakers mentioned before, but latter-day arrivals on the scene like Tsai, Lisandro Alonso, Carlos Reygadas, and Hong Sang-soo. This kind of cinema, usually existing as festival fare rather than commercial staples, nevertheless comes from out of a feature film framework, and (this is important) is also propagated and discussed as such. (In other words, these aren't alternatives to the dominant form, "feature film," but simply "alternative feature films.")

In my previous installment, on Farocki's Inextinguishable Fire, I suggested that the risk of boredom and other elements often associated with this type of cinema (plotlessness, diminished viewer identification, repetition) can be used to specific political and social ends, that is, these are instances in which the aesthetic hews away from so-called "populism" (a delicate word, as cinematic populism may often mean the mere extension of corporate ideology & valuations) but for real, concrete, anti-elitist purposes. Insofar as we think of a film by Tsai Ming-liang as a film in which elements are missing--insofar as we characterize what we see as some kind of minimalism--then I think the above defense applies to the way we view a Tsai film. That is, whenever we want to characterize a film as a deviation from a feature film logic, we should submit it to the test that Inextinguishable Fire, I believe, helps establish so cogently. A general principle for viewers inclined to dismiss the contemplative in art cinema: when we think of the object as missing something, we have to look at it as a solution rather than a problem in order to see what the film is really doing.

Tsai's What Time Is It There? is a beautiful work about the scattering of humanity (a father's death, a woman's emigration) and people's rituals both formalized (Buddhist) and personal & visceral (the protagonist pisses into bottles & plastic bags, the woman phones someone only to hang up, the mother cooks constantly). A fully modernized, speedy, capitalist world (Taipei) still "experiences itself" as caught behind: but of course a city doesn't experience anything, people do, and in this film the object of Hsiao-kang's interest flies to Paris, and Hsiao-kang experiences this loneliness as a rift, a gap, so he obsessively sets Taipei clocks to Paris time. The repetition of the action is the way in which Tsai, in the film-world he's creating for his audience, shows us something about the world he's reacting to, the real world: a narrative feature film that does not attempt to reflect the world but to comment upon its workings.

I wanted to say a few words on contemplative cinema, and I have (thought not very well); I've also ended up giving a prelude--verrry rough notes--to another line of inquiry I've been preparing for this blog. It will come later.
Posted by ZC at 9:56 AM

Lots of food for thoughts in there! Ok, here are my first comments and questions :

- "exploring time or repetition (more often than before as objects rather than means)"
This is really interesting. Time as a film object. Not unlike what Tarkovsky or Deleuze developped in their books. Now how different is the time-object contemplated by Tsai (mundanity?), from the one contemplated by Tarkovsky (spirituality?)?
Repetition is one of the device used to introduce a notion of narrativity in a wordless structure.

-"Tsai may be the one who is most concerned with the history of aesthetics and cultural forms"
I'd like to hear more about this. I'm interested, because I wonder how CC auteur deal with history and politics, it's not as evident as in the demonstrative/militant/symbolic films. In what way do you see this?

"1 - pare down, take inspiration from those independent minds before you who didn't have much money either"
(1) might explain the filiation we traced down, although I would prefer if they had an ideological motivation to emulate old masters rather than just because of material necessity.

"What's missing" is a great way to introduce the new CC paradigm. Maybe you found the key. I like your demonstration there. Tsai shows emptiness as a whole entity rather than the counterpart of abundance, or the hollow evidence of a disparition.

To me What Time is It There? is part of Tsai's most "stylized" work. The repetition of "gags", the near-burelesque rituals, the clocks give it a more dramatic (humorous) structure. The River, Vive L'Amour, The Hole are less tongue-in-cheek and more properly dealing with pure (non-dramatized) ennui.

Tsai on the history of aesthetics & cultural forms--his films hew closest to a "pastiche" style among the Big Taiwanese Trio (e.g., Grace Chang musicals in The Hole; King Hu wu xia in Goodbye Dragon Inn). Hou and Yang of course deal profoundly with history and that includes cultural forms themselves (Hou with Ozu in Cafe Lumiere, or his triptych in Three Times which I plan on finally seeing tomorrow...), but I think Tsai's engagement with the past is the one of the three most tied specifically to previous aesthetic systems, genres, semiotics.

Goodbye Dragon Inn is "about" nothing more than what we see--but at the same time there's a lot there! A Taiwanese cinema (commercially & artistically successful: King Hu on the cusp of counter-Shaw Bros. power and Cannes respectability) looking back on itself, seeing itself close down, the cinemas (the exhibitive world for this cinema!) are closing ... as a form of very allusive, suggestive, loose allegory this film is rife with meaning (or potential meanings, which may make the film better or worse depending on one's preferences).

The "what's missing" idea isn't really mine--Jonathan Rosenbaum has written about this several times, including his Taste of Cherry review (a formative piece of writing for my own cinephilia!) ...

Thanks a lot for commenting, Harry.