I. Preliminary Musings (or, How I Learned to Stop Worrying & Choose a Subject)

At first I tried wringing my hands over the question of taxonomy, but soon realized that while I had plenty to say on the matter (what do we refer to with the phrase "contemplative cinema," what is meant by "the boring art film"), I had nothing of interest or originality to say. Retreat, retreat, man! I told myself. So let me explain why I have chosen my topic in relation to how I've interpreted the official moniker of this blog-a-thon ('contemplative cinema') as well as its unofficial, tongue-in-cheek topic ('boring art films').

I could have chosen Jia, Tarr, Reygadas, Hong, Kiarostami (supremely talented filmmakers, all of them), and in fact I was originally trying to narrow down my topics from a list of contemporary filmmakers that included these artists. But as much as they speak to me as a cinephile and as a person (especially Hong & Kiarostami), I was moved to travel elsewhere in the cinema, to try to find an example to discuss that would be both appropriate and innovative to the topic. So I have chosen Harun Farocki, particularly his film Inextinguishable Fire (1967), a work of agitprop that is available to view freely at UbuWeb (it's 25 minutes long and has English subtitles). 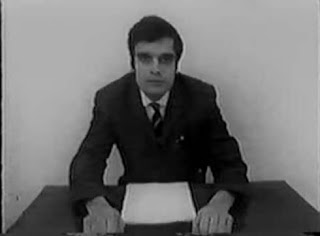 Inextinguishable Fire is a cinematic pamphlet on the destructive properties and the production of napalm, the alienation of the mid- and low-level workers whose labor produces it, and these people's experience of the Vietnam War as mediated by spectacle. It is also a somewhat didactic plea regarding human agency. It's a West German film, in German, though "set" in America (Michigan to be precise).

The film opens with a young Farocki himself, sitting at a table with a paper before him, narrating about the effects of napalm and the difficulty in really getting an audience to see napalm's impact on bodies, on communities. Farocki says that he will show us just the smallest fraction of napalm's effect so as to trigger our comprehension. In a (relatively) famous sequence, he proceeds to grab a lit cigarette (offscreen) and quickly extinguishes it on his bare forearm. He calmly informs us that cigarettes burn at 400 degrees Celsius, while napalm burns at 3000. 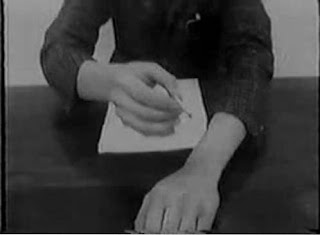 "A chemical corporation is like a set of building blocks." This sentence comes twice in the film. When you atomize & diffuse responsibility for atrocities, you make it manageable. Human beings, workers, become simply cogs in a machine, "doing their job." Farocki's main project here is to connect the dots back into a totality: the single line of inextinguishable guilt spotlighting a corporation that tests and manufactures napalm (Dow Chemicals, the military's manufacturer of the substance during the Vietnam War--they also produced Agent Orange). The repetition of shots or camera movements, with differing "characters" portraying different functions or departments of Dow, is a deliberate patterning effect made to enliven the viewer to the mundaneness of the experience on an individual level, and the terror of the practice on an institutional level. Finding the right formula to ensure napalm's burning power--that is, in reality, its ferocity, its near-inability to be extinguished (after it has made contact with human skin)--becomes a day at the lab or the office. 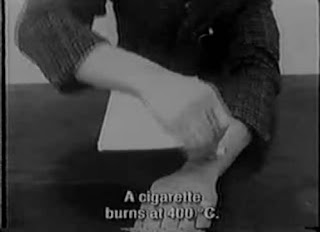 I have not seen the majority of Harun Farocki's work but everything that I have seen hews to the same identifiable aesthetic--very dry, unsexy images presented with deep commitment to process, usually with extensive (and dry) narration. In a word, potentially, "boring." The subjects can be any number of things but images, observation, surveillance, control, and perception are constantly recurring themes: the photography of food advertisements and its relation to still life painting (Still Life), or Playboy photography (Ein Bild), the planning of a mall (The Creators of Shopping Worlds), Allied aerial surveillance, the Holocaust, and WWII (Images of the World and the Inscription of War). Farocki is meticulous, constantly focused. This is not to say there is no sense of humor in his work, no beauty, only that one must attune oneself sensitively to his work to get something out of it more than what we might as well refer to as "plain content." Its in the plainness, the dryness, that we find Farocki's deepest aesthetic and stylistic conviction. The presentation of shots so as not to mystify, but rather, to invite (let's say it) contemplation, reflection, reconsideration--reason--and even imagination. From the choice of subject matter to the choices involved with decoupage and then montage, Farocki's cinema is a supremely ethical investigation into our own world, "as we see it" (to twist a title of one of his films), and as we may need to see it differently. Boredom in a Farocki film is a sign that you're not following along with him; this is a case easily proposed for any number of "boring" art filmmakers, however. The distinction that Farocki has over many of his colleagues is that his films are treatises on the very expectations we bring to the cinema, the ideological ramifications of what is produced for the screen and what we take away from the screen ourselves. He's trying to rewire some of the tendencies our eyes and our consciousness have picked up through years of training; he lays bare; like trying to retrain the damaged body through therapy or simple diet. Here, contemplation is an aesthetic choice on Farocki's part, but its intended effects and consequences are anything but "merely aesthetic." 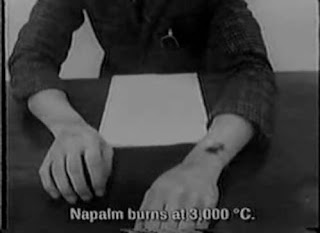 Thus concludes Part I of my contribution to this blog-a-thon; more will follow from this topic sometime between now and the end of January.

Thank you so much, Zach, for being part of the blogathon!
What an unexpected entry point into "Contemplative Cinema" indeed, or is it the cynical extreme of contemplation? I like both. At first I was wondering what a very didactic "propaganda" had to do with contemplation, but after viewing it I realize how many steps foward you look at it. ;)
This repetition of identitcal footage is very insanely clever : an inversion of the Kulechov experiment. By revealing the meaning of images at the end of the second time we are lulled by the delusion he demonstrates. At the beguining of the second run we think "yeah ok, we already saw that, what's new?" so even the second time, when we should be awakened to the manipulative gimmick, our apathy is perpetuated by the conditioning. Only at the end of the second time does the reality behind the "innocent" boredom comes to light, and our irresponsability exposed.
So he doesn't try to persuade through rhetoric, but to surprise our incredulity, which has potentially more chances to swing detractors. The former being more suited to preach and comfort the choir.

Now I'm not sure yet what to take from this multiple material to build a case for the Contemplative Cinema. It seems to primarly denounce the effects of boredom as a flaw instead of an enlightment. I hope you will expand on your last three sentences. I'm highly interested.

I guess I can't see a way of addressing "contemplative cinema" and the controversy of cinematic boredom ("is it boring because it's art, or art because it's boring," as one contributor wrote) without being in some small way a defense of (potentially) boring material. This first part of my contribution is a way of insisting on the good faith we should extend to artists, especially when we don't quite know what they're doing. (You put it absolutely perfectly: "he doesn't try to persuade through rhetoric, but to surprise our incredulity...") But I'm also trying to build an alternate pathway to the same solution--I'm not trying to bolster an "art for art's sake" argument here. Perhaps this is why I chose an artist as polemical (and "boring") as Farocki. And hopefully in my next installment I'll be able to produce some good points with regard to him and to others.

So I'm taking a class with Kaja Silverman and I was reminded of your post: have you read the book she wrote with Farocki? I have not (just Subject of Semiotics) and was curious to hear what you might have to offer in that arena. She's not quite as fun a writer as, say, Barthes, but her lectures are pretty engaging and S of S is a pretty useful book for the uninitiaed (my classmates).

Ryland--you mean the book on Godard, no? I haven't read the whole thing so I don't have much of an opinion, but what I did read was useful ...

Yeah, that's the one. I may end up reading it but the real revelation this semester will probably be the seminar on Stanley Cavell and his approach to criticism. How perfect a class is that for my return to school? Anyways, thanks for responding.

Zach,
Thank you for an introduction to Farocki-I was not familiar with his work. Have you seen An Injury to One (about Anaconda copper) and would you care to comment?

I've been reading your blog with interest.

I am assistant editor with mute magazine www.metamute.org

We are looking for a writer to cover the recent Farocki film collection released on UBU here: http://www.ubu.com/film/farocki.html