Quote of the Day

"Why make images? Why not be satisfied with embracing reality? Experimental films have often formulated and more often answered this fundamental question in art. Cinema is not necessarily an echo chamber (Jean-Luc Godard's "damsel of recording"). It can be an act; it can become a weapon; it can even get lost in combat. Consider René Vautier's sublime works: designed like missiles to destroy the enemy (capitalist exploitation, to be brief, especially in its colonial forms), they burst into flames, they get blown to bits in mid-air (shots from Vautier's films constantly reappear throughout militant cinema); or else, having accomplished their mission and self-destructed, the work merges into its own concrete historical effects. It would be useful to study the history of forms that brought about militant practices in cinema, whether they came from direct intervention (René Vautier, Chris Marker, the constellation of collectives that blossomed at the end of the '60s, Bruno Muel, Dominique Dubosc...) or from a more classic activity such as pamphlet writing, a struggle against a state of affairs, beliefs or even the image itself (certain cool-headed films superimpose these three targets, including masterpieces by Maurice Lemaître, Marcel Hanoun, the Dziga Vertov group, Djouhra Abouda and Alain Bonnamy, Dominique Avron and Jean-Bernard Brunet). Making images nobody wants to see, offering images for things that don't have any, going even farther than transgression or subversion, experimental cinema confronts the unacceptable, be it political, existential, ideological or sexual. Even these purely nominal distinctions would be obliterated, first by underground cinema, for one (Etienne O'Leary, Jean-Pierre Bouyxou, Philipe Bordier, Pierre Clémenti...), and later by individual personalities like Lionel Soukaz."

-- Nicole Brenez (of course), from the Introduction to Jeune, dure et pure! 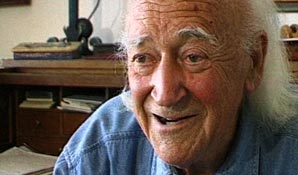 Above: Vautier. I really like the idea of one's work living on anonymously by being collaged by others in spirits more or less true to your own.
Posted by ZC at 9:59 PM

My first question in response to this quote was going to be: where are the "militant practices in cinema" today?

I still want an answer to that. But I think it opens a larger question about a problem with cinema in general: distribution and time. I'm afraid militant practices in cinema aren't readily available; like this passage says: because of their radical specificity, they self-destruct and do not live on, very much unlike radical texts which are reproduced and reread in books by people far removed from their original context.
Where can I see these films outside of a university? Hell, even in the academy: the university in my town has four books on Yvonne Rainer, but not a single film!

But maybe there is a radical potential in such emphemeralness?

Which probably complicates arguments about cinema being an accessible medium in the age of reproduction. Maybe something like the Anarchist film channel are beginning to address the problem.

I think it might return to "Elusive Lucidity" if you tucked the title into an alt and/or title attribute in the img tag.

Love the site, by the way (though I rarely comment).

Militant cinema practices? Online is a great place to start--the fact that police brutality videos, to name one example, are being captured via consumer video cameras or cellphones and then posted on sites like YouTube is indicative of some good possibilities.

Tuwa, thanks, I'll see if I can change it.

Videos on YouTube are a great example, but I was thinking more of militant minded filmmakers. Or film, rather than video. But the differences between film and video are probably not worth discussing in regards to "militant practices." So I guess activist videographers, like Cascadia Media Collective or Big Noise Films, would count too.

Any other examples come to mind? It's fun to think of them...