Images of the Day: Suspiria & Vice

For a few friends... 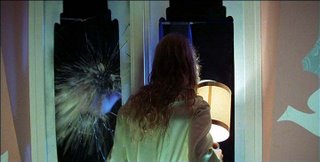 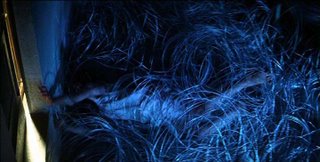 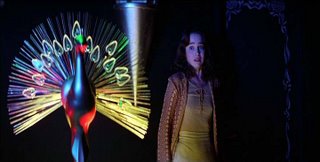 "Argento's lurid, saturated colours lack nuance and assault the sensorium in their perverse mimicry of the Disney cartoon spectrum. Red predominates in a variety of vibrant shades. It is first glimpsed fleetingly, on an anonymous woman at Frieburg airport where the heroine, American dance student Suzy Bannon, arrives. Suzy next sees red on a terrified student fleeing the dance academy. Red stains the outside of this building, spreading via the wallpaper and drapes as well as wine, blood, fingernails and lips. Violet-blue velvet covers the walls and adds tactile to visual potency. This Technicolor palette drains the strength of the good characters by absorbing their life energy and glowing brighter afterwards. It vibrates in us intensively, oppressing yet arousing us." (p. 142-3)

"Anamalous forms of life invade the dormitories. Their repulsive tactile qualities are emphasised by the sensitive skin exposed to them as the dancers undress. A bat flutters down onto Suzy and clings tight, biting her. Hundreds of maggots appear, wriggling and crawling over the floor,a nd the girls are compelled to tread on them, squashing them either with their shoes or with naked feet. The maggots land in the girls' hair and crawl on their skin as they struggle to brush them off. The use of close-up in this sequence intensifies the viewer's virtual sensation of slime, squirming larvae and viscous texture, particularly repellent on bare flesh." (p. 143)

There are few places on the Net to get as good a giallo education as Killing in Style, it seems to me. 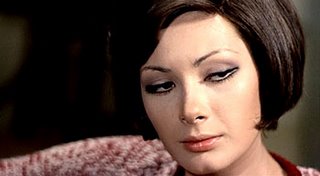 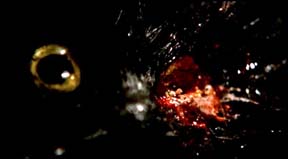 What have I learned from gialli, not that I've actually seen very many? It's good to drink J&B, and it's not a good idea to cross women or animals. (Two stills above from Sergio Martino's Your Vice Is a Locked Room and Only I Have the Key, '73.)
Posted by ZC at 8:04 PM

There's actually some factual back-up for Powell's line about "the perverse mimicry of the Disney cartoon spectrum." I read somewhere - perhaps Video Watchdog? - that Argento specifically modelled Suspiria's palette on that of Snow White. Alas, I have no independent attribution for this, nor have I done the crucial side-by-side comparison of the two films that would put this to rest once and for all. But isn't it weird how the Disney influence has to be explained in kind of a "you wouldn't believe this, but..." tone? Wouldn't it be weirder for a filmmaker - any filmmaker - working in the 1970s to have NOT been influenced by Walt Disney?

Thanks, Handsome Dan! This sounds like a job (or, um, a paper) to be handled post-haste. As far as WD influence, I perhaps wouldn't go as far as you, but I would say that I would find it hard for a genre filmmaker working in the 1970s who was interested in color & artifice to not be influenced (even if negatively) by Disney.

(I see you write a bit for Teleport City? I love that site--it's on my list for my next links update.)

I haven't re-watched any of the canonical (pre-1950s) Disneys (save Snow White) in some time, so a lot of this is pure conjecture. But I think there's a reason why those old cartoon features - some of them almost 70 years old!! - seem too have aged as well as they have. Disney was pioneer in animation of course, but he also ran laps around any of his Holywood contemporaries in color, camera movement, movement of figures in the frame and maybe even sound, simply because live action movies were bound by limitations in technology and style. I bet it wouldn't be hard to find formal echos of, say, Pinocchio or Fantasia or heavens-know-which shorts in some of the American classics of the 1970s. All the 'New Hollywood' dudes like to pretend that they all sprang from the breast of European art cinema, but Altman, Spielberg, Malick, Lucas, DePalma, Hal Ashby, Bob Rafelson were all the right age to have their minds blown by Uncle Walt in their formative years. Surely the situation was not too different in Europe outside the Iron Curtain (or all throughout Europe, even in the "capitalist" West? I'm sure that Walt got pretty swell distribution deals from the Allied flunkies who were in charge ofthese sorts of things in the late 1940s)? Again - I have no evidence for this, but it makes so much sense I can't imagine that I'm too far off. I never understood why Disney doesn't get a free pass into the pantheon of Acknowledged 20th Century Cinema Greatness, why the name "Disney" doesn't automatically roll off the tongue after one rattles off "Renoir", "Ozu", "Bresson", "Dreyer", "Tati", "Eisenstein" (himself a Disney fan), "Ford", "Lang", "Welles", "Bunuel" and so forth. At his best, he is in every way the equal of those other guys, and probably more influential than any of them.

Hey! Great to meet a fellow Teleport City fan! Add them to your links TODAY! I haven't been able to devote as much attention as I'd like to reviewing movies for Keith, but I hope to have a few ready for him in the next weeks. Teleport City has influenced my knowledge of and tastes in movies as much as any professor I've had or books I've read. Keith is a swell guy and he runs a great site, and all your readers ought to head over there right now!

At first I thought, "Handsome Dan must be wrong, there has to be sufficient scholarly and critical attention to Disney." I pulled out my copy of Bordwell et al's Film Art and check the index--three mentions of Disney the man, two of Disney the company. My instinct was mistaken! What's strange is that academia is usually--to my mind woefully--Hollywood-centric, maybe not always pro-Hollywood, but more often than not promoting its existence as "the norm." In which case, Disney's history and impact should certainly be given a lot of weight, outside of 'animated film' as such.

On the other hand, my copy of The Oxford Companion to Film, from the 1970s, gives Walt Disney more column inches than an entry for Rossellini! Even so, your point is taken.

I would part ways in saying Disney ran circles around his contemporaries--give me Hawks, Ford, Sirk, Tourneur, De Toth, Sternberg, Welles, and (yes) Chuck Jones and Max Fleischer any day. I think they're much greater artists. But what I think is worth noting, and perhaps here we can find a little overlap, is that the well-oiled machine, the 'genius of the system,' in live action H'wood production, with its Selznicks and its Curtizes, was comparatively stable and Fordist in comparison to the Disney stock of the early decades, which maybe more visibly emphasized a kind of visual grace and invention. Like I said, I'm personally not convinced it's great art, but as cultural product, certainly, it's something. (And not chopped liver.)

As for 1970s American filmmakers and the possibility of Disney influence ... again, it'd be a really worthy subject for someone to study. Superficially I'd say I'm more predisposed to the "movie brats" (Spielberg, Lucas, and so on) being Disney-influenced ... I'd guess slightly more H'wood-marginal filmmakers (Altman, Ashby) were influenced by Looney Toons aesthetics before Disney ones. The most 'out-there' American narrative filmmakers of the period seem to be the ones whose ingestion of European art cinema should be taken seriously: I can't discern any influence of children's pop culture on Hellman, Cassavetes, possibly Malick or Hopper. If on Teleport City or elsewhere you decide to tackle this problem in more depth and at more length, drop by and let us know.

Oh ... and a Teleport City link is coming tonight.

I've been visiting many blogs like this one, and this has the best pictures. I think you need more fluency to redact the explication about each issue or topic picked to be posted. But in general, this blog is great and below to my mind. You know exactly how to increase my expectation.