Olaf and I discussed film museums early in the festival. I consider myself a spiritual child of Henri Langlois and have always been fascinated by the notion of a film museum. For many years I have drooled over Langlois' immense Cinematheque book with the photos of his original museum designs. I have been to film museums – in New York (AMMI) and Spain (Girona) – but nothing prepared me for what I saw yesterday here in Torino.

Now, Olaf objects to the museumification of cinema –"only the projected image can keep cinema alive!" –, but admits that he has a problem with museums in general. I, on the other hand, looked forward to my first open afternoon to go the Museo Nazionale del Cinema, which I had heard was the greatest film museum in the world and reason alone to visit Turin. When friend andf ellow Torino blogger Neil Young said he was going, two mornings ago over breakfast, I joined him. I probably looked like a lost schoolboy in this place as I wandered around in utter wonderment. Another purifying experience of many in Torino. Here are a few pics, more to follow… 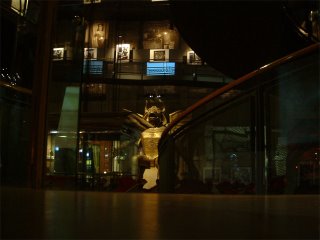 1. The main lobby, with the giant figure from CABIRIA. 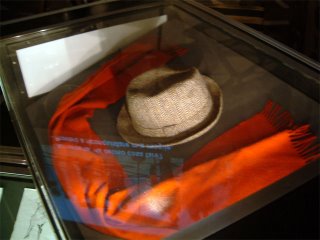 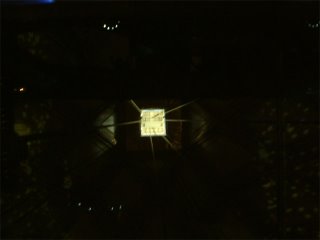 3. The museum is hosted inside of one of Turin's mos tfascinating structures, the Mole Antonelliana. Inside is a suspended glass elevator, almost like Willy Wonka's, that goes to the top of the building. Here is the view pointing directly up.

Just a note here from the blog owner in charge of these last few badly formatted posts--the Blogger program is not being very friendly with me lately, so I'll see if I can clean these up tomorrow. In the meantime I apologize for the subpar appearance.