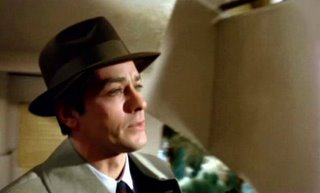 Michel Ciment: "For the grand rafle you used a lot of Jewish extras."

Joseph Losey: "Not only that--but many people of the crew had a direct experience of the period. Trauner for instance was a Hungarian Jew who had to work in a clandestine fashion when he was set-designing for Carné. The extraordinary casting director, Margot Chapellier, lost many of her family in the camps. The head of the laboratory at LTC, Claude Lyon, lost his mother this way too. We went to Jewish organizations for the final round-up of the Jews at the vel d'hiv. From them I had several thousand extras. On the first day of shooting at the stadium, quite a number of the older people just had to give up because they found it so close to what they had experienced that they couldn't stand it emotionally. They came to me and said 'We don't want any money but we're turning in our yellow stars because we simply can't stand and watch this for three days.'"

With a DVD viewing of Mr. Klein last night, I think I'm finally starting to get Joseph Losey. I've basically liked the handful of films I've seen by him but I never could find a way in, totally past that old cliché of 'appreciation more than affection.' Now things are starting to make more sense. Thematically speaking, Losey seems to gravitate to protagonists who slowly, desperately come to realize (if not completely comprehend) the structure and parameters of the prison-narrative they've been built into. In Mr. Klein it's about a certain obsession with one's own (very civilized) complicity in utter social & political savagery.

At several points in the film, Alain Delon appears in a crowd, long shot, and our eyes are drawn to him (still) while the people around him are mainly in motion. The ocular attraction of the individual that we hold for Delon in this instances is grafted onto the more fleeting instances where Delon's Robert Klein spies the other Robert Klein, who (unwittingly?) flees our protagonist's grasp as easily as horror movie villains stalk victims by merely walking--it's irrational, but the film insists on our acceptance of it.

I'd have to look at the film again, but I got the feeling that the colors in Delon's wardrobe were slowly leeched out during the course of the film--when we first see him he's in a rich, mustard- or rust-colored coat. By the end of the film he's wearing a pale trench coat, as though this experience is draining him metaphorically as a character, literally as visual screen presence. (Very possibly my perception is off, however.)

After the movie was over I saw that Jesus Franco's Vampyros Lesbos was coming on some channel last night (Sundance, I think), and so I decided I'd watch a little bit of it just to see what it's like (thus far I'm not sold on Franco). Over the course of the last night, the anti-semitic drag act in Mr. Klein has blended a bit in my memory with the the wordless lesbian performance we see in the beginning of Vampyros ...

... Dan Callahan, writing a Senses of Cinema Great Directors profile on Losey, thinks little of Mr. Klein: "though acclaimed by some, [it] is a laborious tale of the French Occupation told at a funereal pace. The customary nervousness of his camera had turned clumsy and awkward by this point." Do any EL readers agree!?

Andy Rector on The Lawless.

MC: "If you had not had your experience of McCarthy in America, you might not have been able to recreate so well this atmosphere of indifference and fear."

JL: "Certainly, because nobody was prepared to take a stand and say 'No.' Because if they did, then they were immediately blacklisted. The ultimate of that kind of attitude is what is happening now, torture as policy. Not torture to get information, because the police already have the information. Torture them long beyond the point where there would be any information that they could possibly give if they had it. The aim is to make everybody on the street so frightened that they won't even remotely engage in any kind of activity."

MC: "Klein II must belong to the resistance. There's no other way of explaining his strategy."

JL: "Of course. That's why the girl works in a munitions factory. I wanted to show that he was a Rothschild type of Jew, who had musical gatherings and female companions, but who was at the same time committed. I'm thinking of Jean Lurçat, for example,a very cultured man, a remarkable painter, who became a leader in the Resistance. For if you are sensitive and enlightened, you make certain decisions in certain circumstances, you can't be an average bourgeois who eats at La Coupole. As Brecht said in Galileo, 'You can't pretend you haven't seen what you have seen.'"

I've had difficulty getting Losey, and would love some help, a way in...

I saw The Boy With Green Hair a while back and liked it a lot. La Truite frustrated me and I couldn't get past the first hour (I rarely bail on films, perhaps I was having a bad night). The Romantic Englishwoman, Accident and Eva were all fascinating but puzzling films that I quite enjoyed but frankly I felt like I wasn't able to put my finger on what exactly "'they were doing."

I wonder which of his films people think of as the strongest ones? Are any/all of the following considered to be reputable Loseys: King & Country; Modesty Blaise; Trotsky; The Servant; Time Without Pity?

Girish, I'll try to get in 4-5 more Loseys before the year is out, and translate that into a few more posts on him as a filmmaker as I myself work towards a better understanding of him ...

BTW, I'd say King & Country, The Servant, and Time Without Pity have very good reps, while Modesty Blaise and Trotsky have followings of a more coterie nature.

I disagree with the Dan Callahan's dimissal of KLEIN and find it one of Losey's best most formally rigorous films. This idea of "occular attraction" and constant seperating of Klein (formal, social) is very interesting Zach and it does seem like the strategy at work. I tend to prefer Losey's Hollywood work, more termite, with it's teeth into american society.
I'm afraid to see GALILEO! Losey directed one of the U.S. theatre productions just after Brecht returned to Europe and I don't believe B.B. was happy with it.

Trotsky is one of my favorite Loseys, but almost no one likes it. I think that Blind Date is probably his best.

There are several scenes in Mr. Klein that are worth watching in themselves. The nasty physical exam of the naked woman, which occurs at the outset, is the only portrayal I've ever seen in film of a standard Nazi practice (to determine the degree of penetrance of a "mischling's" Jewish genes). German doctors supplemented their income doing these exams (which the victims had to pay for); one of the kits that was sold for the exam, complete with measuring devices for determining whether the nose is "Jewish", was exhibited recently at the Holocaust Museum in Washington. It's remakable that the scene in the Losey film shows this exam being administered by a FRENCH physician. I'd never heard of that, but a colleague has vowed to investigate. If true, this would be a further stink bomb dropped on French self-deception concerning its complicity in the Third Reich.

The very next scene, in which a Jew who needs hard currency immediately to save his life sells a family heirloom, a small painting by a Dutch minor master, is a self-contained gem. Beautifully thought out, both visually and aurally and also -- most remarkably -- philosophically, it is a textbook case of exploitation. The seller is shocked by the low price that is offered to him for his painting; but he immediately realizes that he would get the same insulting offer from any of the other dealers who trafficked in art sold by desperate refugees. The seller is better off if the buyer makes the offer than if he doesn't. And the buyer is, all told, not such a bad guy, really. No hero, to be sure, but in the context of those times, not a monster either. He's just doing his job, which is to buy art low so that when he sells it high he'll make a lot of money. Art dealers are no different today. He is not the source of the seller's problems; and he even tries to extend some sympathy (understandably, this is immediately rejected). Clearly, the filmmakers loathe him; the challenge is to say why. I show this scene to students several times each year, asking them whether this is exploitation (which it of course is), and if so whether it's wrong on that account. Thus do we begin our discussions of the nature of exploitation and of its morality. I know of no better case study.

One final note. I know where the title comes from. Hint: take another look at "The Sorrow and the Pity," the film about French collaboration with the Nazis that ended the long post-war silence in France. You'll come to a short but piquant scene in which a small man is held to account for a newspaper ad he placed during the war assuring his fellow citizens that, his name notwithstanding, he was not Jewish but was a real, genuine Frenchman. Yes, the name was Klein. How do I know that's where the title came from? I had a friend ask, when there was still the opportunity. The real-life Klein, by the way, wasn't Robert, but that's still the source of the name.

P.S. No one has mentioned Losey's late film of Don Giovanni. It is extravagant and wonderful.

I just can adore Jewish people, there were being destroyed during many centuries and they survived! And most of talented people have Jewish origin