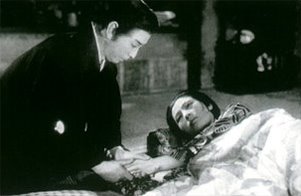 Kikunosuke (Shôtarô Hanayagi) and Otoku (Kakuko Mori) in Mizoguchi's The Story of the Last Chrysanthemums.
Posted by ZC at 10:30 PM

For an allegedly new 35mm print, the Janus print at Film Forum was appalling. Particularly disappointing because the Japan Foundation print in the Shochiku series last year was stunning. The print of Oharu at FF was a bit disappointing as well, but at least you could still see the film. All the detail in this print dissolved into fuzz and the gradations of grey disappeared. Many of the sad faces were obliterated where in the print that screened at Walter Reade they were crystal clear. What a drag.

It has since been suggested to me that my memory of the NYFF print is mistaken and that it was equally bad. I still think it was better, but suffice to say that the print at FF was disappointing.

Yeah, the print wasn't great--but I thought Chrysanthemums had better contrast than Oharu. I decided to forego Sansho dayu (which I've seen once, on video only, yeeeears ago) and wait until it comes to Walter Reade.

Sansho looked gorgeous at the PFA in Berkeley. Unfortunately Oharu and Zangiku were the two of the mini-series I had to miss.

I just saw this (on the awful print) a couple days ago too, but wasn't the camera even farther back? One could barely make out the details of character expression in the film, a combination resulting, in part, from the print quality, but also from Mizoguchi's extreme camera distance and restraint in most scenes. I would love some historical/industrial context that explained how studios/producers let the director keep the audience so far away from the drama in 1939. A very remarkable movie. The print yesterday of Street of Shame was the best of the series, by far.