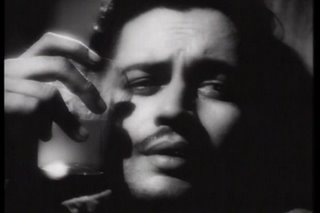 So I've still only seen one Guru Dutt film, actually (Kaagaz Ke Phool), but when I came across this still, I found it captivating. The power and the drama of drink! (This still is from Pyaasa.) The luminescence appears from the bottom of the glass, washing him in light, but it only pushes the shadows to the edges, where they coalesce in dark regions, ready to take over the universe when the glass no longer reflects any light. It's why I--like the sarariman in Oshima's Cruel Story of Youth--drink a lot only when I'm happy, not when I'm depressed ...
Posted by ZC at 8:14 PM

It's a tremendous film. If Kaagaz can be seen as his Intolerance (the folly he made with his commercial earnings), Pyaasa is his Birth of a Nation (the big commercial and artistic success that gave him the money to make his folly).

Pyaasa is just about a perfect film--one of the greatest Indian musicals ever made, in my opinion; if I prefer Kaagaz, it's because my taste runs into flawed and uberambitious follies.

Oh wow--forget Lagaan, forget Bollywood Hollywood, forget Bride and Prejudice or the new Devdas or whatever Indian film is being pushed nowadays--Dutt is it. And Raj Kapoor, and Bimal Roy. They're among the greatest filmmakers in Indian cinema.