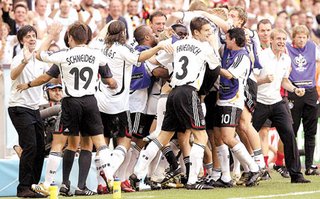 I have to admit, Germany, I'm pessimistic. I'm not sure you will do it--defeat Italy. I know you can. I don't know that you will. I hope Klinsmann riles you up so you play like madmen, tells you that the game is about scoring more than your opponent (not just scoring one while your opponent scores zero; not playing for a penalty shootout). It's been, what, six years since Germany have defeated outright a "top" national team? End that tomorrow! Overwhelm them with positive soccer, and with that victory leave behind the phantom husk of safe, uninspiring German tactics.

As for France-Portugal, I will be rooting for Zidane's squad, but I like Portugal's effort too and if they win I'll wish them well in the final, moreso if they play Italy.
Posted by ZC at 6:51 PM

Zach, I can't believe there's someone over there in the States that groks this moment in the showdown as well as you do.

Tomorrow will be electric over here.

On another note, for the most part, the world has expressed its surprise and appreciation in response to the Germans' hospitality. I'm hoping that this strange and new flirtation - Germany and the rest of the world - can flourish even if Klinsi's team is stopped tomorrow.

True, even if Germany are stopped tomorrow, there's hope for a new change of style - away from the Germany of yesteryears.

I would love to see Germany and France in the final but obviously I don't think it'll be as straightforward as that...

David, thanks for the compliment, but really I'm just an amateur--believe it or not, there are real, dedicated, born-and-raised American soccer fans. Honest!

I can't wait for this game, in fact I think I had a few dreams about it last night.

Daniel, good to know another Germany supporter. There aren't as many of us as there should be!

Well, that was some double-blow right at the end there, but no one over here's denying that Italy played a mighty powerful game. Today, the German papers are full of praise, celebration and big "Danke"s for "Die deutsche Elf" and that's awfully good to see after such a sobering evening.

It'll be a grand party this weekend here in Berlin anyway, and of course, everyone's already looking forward to EM 2008.

Yeah, as much as I've criticized Italy, their victory was earned the hard way--they didn't play dirty, and when it mattered most, they put two excellent goals in the Net. I'll be rooting for France this Sunday, but if Italy continues to play the game they'll at least have my respect. (Maybe WC 2006 will see two stereotypes smashed--the Germans stop playing conservatively, and the Italians stop playing dirty?)

After this Cup I'll be waiting to see, also, if Portugal and France can survive the retirements of their talismans (will Deco/Ronaldo & Ribery carry the torches?), and if the new manager can cohere the great talent available to England. (Same for Brazil.)