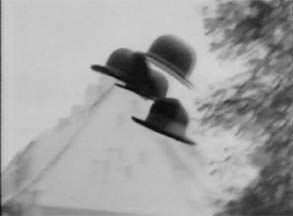 While I still haven't re-installed a DVD driver in my computer yet, I have figured out how to capture images playing in media players (hint for those who were clueless like I was: in the 'tools-options-performance' menu, click 'advanced...' and then de-check 'use overlays' under 'video acceleration'). So this post will partly be an exercise in screen captures!

Hans Richter's Vormittagsspuk (aka Ghosts Before Breakfast) (1927-28) is regarded as either one of the last Dada films or one of the first Surrealist films.

"The story ... was originally intended to follow Werner Gräff's film script about the rebellion of revolvers. Richter opposed this idea, reasoning that revolvers that rebel do not shoot; therefore, not shooting is not an action. Richter settled on a story about benign objects that rebel instead. "We all had bourgeois bowler hats on." The hats were attached to black strings on long poles and were swung from the top of a garage in front of the camera." 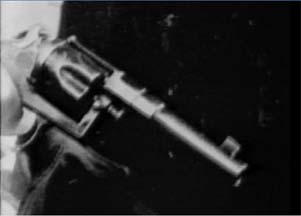 A title at the beginning of film reads, "The Nazis destroyed the sound version of this film as degenerate art. It shows that even objects revolt against regimentation." Richter infused his film with semiotic nuance--Foster writes,

"The flying hat is another potent metaphor ... . For a period of 100 years beginning in 1827 the hate was commonly used as a symbol in German literature. ... In the German culture of the nineteenth century, hats that fly from people's heads were a sign of existential danger looming in the near future. The hat was the quintessence of the bourgeois citizen and a symbol of the status quo. Pictures and words indicating that hats no longer fitted well, and were threatening to slip off heads, indicated that society's stability was in danger. A more familiar twentieth-centujry image is cited by Walter Benjamin about Charlie Chaplin's trademark bowler hat: "His derby wobbles for a lack of a secure place on his head, giving away the fact that the reign of the bourgeoisie is wobbling too."" (p. 133)

By the end of the film, the hats of course come back to rest on the cipher-characters' bourgeois heads: 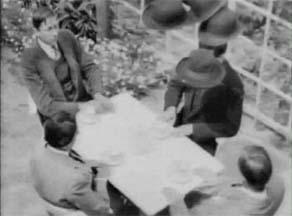 And one could draw the further conclusion that non-regimentation brings harmony (while strict regimentation sows the seeds of confusion and chaos). I don't know that Richter would have liked that reading: it's almost a Deleuzian buggery of his worldview. Still, the underlying principle is that things get weird, and hopefully we get unsettled. 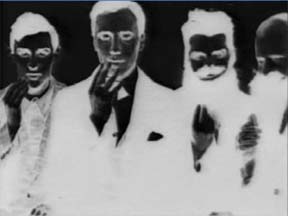 But if we're unsettled, are we guaranteed to be unsettled out of our (perceived) sociopolitical complacency? When do anti-bourgeois art tactics shock the privileged targets? When do they simply give us something new and unusual to look at? For I have MPEG files of both Richter's Ghosts Before Breakfast and also the infamous 'Tara Reid tit slip' on my hard drive, and I find (celebrity gossip whore that I am) that since I have paid for neither of these, I don't know what the concrete difference is--aside from the fact that one is a digital reproduction of a work of art, and the other a digital showcase for, um, a work of plastic surgery. 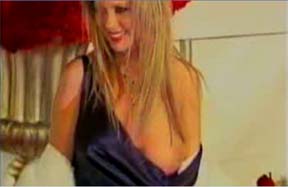 They both fascinate me. And ... might the supreme and carefree stupidity of a Hollywood party-starlet achieve the greater political good, though, galvanizing me into disgust for the star system and the culture it sits atop, blinding us to more important things? The fact that I rarely pay for multiplex entertainment--that I went through the calender year 2005 giving truly almost nothing to this monstrous establishment (or even its arthouse peripheries)--should stand for something, right? Then again, I find that even as I happily skip the films, television shows, and music of the celebrities I love to hate, I still spend my time reading, repeating, and discussing gossip about them. Is meta-entertainment a new form of entertainment, a new articulation of the culture industry!? It is this possibility that makes me think that something like a Hans Richter film has a renewed cultural viability: its straightforward attack on convention, which for a postmodern moment might have seemed achingly quaint, may actually be as true as it is easy. Sincerity rests at our feet, maybe a valuable tool, and I wonder if we (like the American national soccer team) will fumble with this object at our feet though we are so close to the goal ...
Posted by ZC at 6:47 PM

When I hear "floating hat," I think of Oddjob's (lethal) one in Goldfinger.

One of the nice things about our generation is that we can intermingle Hans Richter and the Tara Reid tit video (much to the befuddlement of our seniors).

First, to deny the very things that take up a large part of our cultural sphere-- supremely stupid as some of those things may be -- is to be ignorant. On the other hand, to analyze the larger cultural meaning(s) of said things from an intellectually enlightened point of view can can be boring (i.e. academic).

The culture industry has already taken meta-entertainment to create mass-cultural articulations of stories we read in celeb rags. Films like RUMOR HAS IT, THE BREAK UP, MR. AND MRS. SMITH, etc. etc. ...

After they're released in theaters, these packaged goods can be purchased in the checkout aisle next to your entertainment mags, candy bars, hangover medicine, and cigarettes. At this point the targets of your disgust, who have failed to convince you purely on a consumer level, have already made a killing with their target share of the market.

For the last year or so I've lived in a wealthy, predominately white neighborhood of Chicago. The local chatter you'll hear at bars -- though I'm hardly what you'd call a "patron" -- is mostly about baseball or celebs. I guess it's still impolite to talk about art and politics.

We're not even close to the goal, Zach. Sincerity is sadly out of fashion. I have a fantasy that, before corporations find a way to control internet content, we'll be completely free, at least at the economic level, of the entertainment industry. And by "we" I mean everyone, including all those f*ckin idiots who live in my neighborhood. (Hey, it's already happened in Asia....)

Where are you finding these films online?

Girish--I'm not a Bond fan, so I don't even think of Oddjob (I've never seen Goldfinger), but instead his spoof in Austin Powers. There, he throws a shoe.

Jen, the Richter stuff is available at UBUWEB, an amazing resource. I am pretty sure that it is also available on YouTube, along with some other hit-and-miss avant-garde stuff.

Gabe, the struggle's not over yet! What I try to do on this blog, sometimes anyway, is productively fuse discussion of things that seemingly nobody wants to talk about but which provide vital discussion (e.g., Hans Richter), with things I think people should talk about (politics), and things people are supposed to talk about ("politics," that is, the stuff we see on TV as such), and the things people really do talk about (celebrity).

Zach, I used to be a Bond fan a long time ago (in my early teens!), but after I read about Bresson liking Goldfinger, I had to watch it again.

It surprised me in some ways--it's a well-composed and -staged film. In its visual conception, it's a sort of "art-thriller."