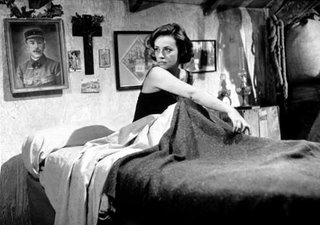 (For Andy--) Joseph codifies his desire for Celestine by insisting to her that, deep down, he knows they are alike. He is correct but not in the way that he thinks. What he tells himself is that she loves Order--that she can be a fascist too. What Joseph dares not acknowledge (and is perhaps unable to realize) is that the difference is Celestine, just like him, will work underhanded means to achieve her goals, to square her sense of justice. If she is buffeted about in this diegesis, in this world, it's because she lacks power and means. But if she survives, it is because she is crafty enough to observe. Celestine is a bit of a cipher in Buñuel's film (I haven't seen Renoir's version or read Mirbeau's book to compare), but she's always gazing at everybody else. 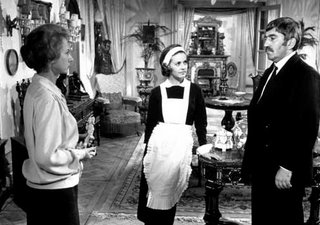 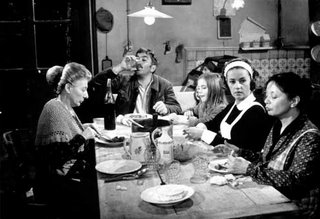 More to come on this film and related issues in another post ...

Bunuel's Chambermaid did not strike me as deeply as it did Bill Krohn (that is to say it didn't change my life), and not as much as Renoir's version, which I've seen many times and love. Your observation of Celestine/Moreau's gaze in Bunuel's version is very interesting and it makes me want to re-view the film, which is long overdue for me anyway.

It also seems entirely consistant with certain characters in Bunuel (Gerard Phillipe's reformist in La Fievre Monte a el Pao, Nazarin, Bulle Ogier in Discreet Charm, the teen girl in Young One, even Friday in Robinson Crusoe), a sort of epic detachment in clash with other very straighforward performances by other players.

In Renoir's version, Celestine desires capital because she desires freedom from it (and as Marx or Lennon might say: life happens inbetween) - an escape from servitude. She is very much an "actor" in the non-theatrical/cinema sense, not an observer. In the process she brings about a medium-sized revolution in the village (Renoir was always fond of delineating between the large and small revolutions of life, throwing off the yoke of oppression vs. throwing an electric floor waxer out the window).

Renoir's Chambermaid film is an astonishing chronicle of class and the use of privelege (or lack of it i.e. Joseph trying to scoop Celestine) within the classes.

We have an irreverent bourgeoise, the husband, who clings to his bourgeoisie values because he doesn't want to work (in daily life or at revolution) but would gladly stand back and let an overthrow take place.

We have the wife, a stern bottom-line type bourgeoisie who plays along to a certain extent, but who won't hesitate to brutally enforce her "rights" of private property, exploitation, inheritance, etc.

Then there is the son, who would be called a hippie if the movie was made a few years later, like the father in secretly hoping for the fall of his class and a violent cleansing, but also willing to use his scarce energy (for he suffers some physical malady that is vague enough to be easily interpreted as the spiritual malady of his class) to help the only class capable of abolishing the class system: the working class ("help us, destroy yourselves" -- this May '68 graffiti on one of the university walls could be the motto of Renoir's Chambermaid).

The village working class and peasants surge forth in the finale of the film in, for me, one of the most stirring, unforgettable, and vital scenes of collective violence I've ever seen in a film. And truely, Renoir is picturing a revolution, even if the violence is aimed at Joseph and not the masters of the house (I could go into this further won't at this moment). Not to say that the masters of the house fare very well in the scheme of village politics by the end...

One character I didn't account for above is Burgess Meredith's Captain Mauger. I have no recollection how or IF Bunuel brought this character in, or if he is in Mirbeau's book at all. And without knowing I begin to wonder if the character was a complete fabrication by Renoir and Meredith (who helped write Chambermaid's script). I say this because Captain Mauger is a quintessential Renoir invention (?), a mix of Boudu and Lestingois (which the film Boudu Saved From Drowning hints at anyway), a personification of that mixture of the comic and the tragic which the rest of the film's characters reverberate off of. This character is also the extraordinary result of the experimentation with actors that Renoir was dabbling in at the time, experimentation that peaked with Le Testament du Docteur Cordelier. Captain Mauger is in part the most delightful, almost anarchistic, character in the film who, at the same time, does not give the slightest hint of idealism; he does not personify, even minutely, a resolution to the class war going on around him. He is a truely exceptional character, and one who commits one of the films most detestable acts amidst all his likeability.

It is completely understandable why there was a certain backlash when Renoir came to the US and made several abstract ("aquarium light" in Bazin's words) studio bound films. But take a look at the finale of this film and you will see one of the greatest examples of disquiet in the cinema, precisely by virtue of it being shot on a studio set.

I have not read Mirbeau's book, I'm ashamed to say. It was something Bunuel wanted to film for years apparently. I was once speaking with a middle-aged writer who'd studied Surrealism and Bunuel's Chambermaid came up; he immediately dismissed Renoir's version in favor of Bunuel's. I said "well, I assume it has a different spirit than Mirbeau's book but..." and he cut me off with "who's Mirbeau?"! I told him and he said "oh, I thought Bunuel was just adapting some trashy novel".

That's a lot to chew on Andy--it'd make a fine blog post of its own on Kinoslang! Regarding Celestine in Renoir and in Bunuel, I wonder if Deleuze and his delineation of 'actors' and 'observers' in classical and modernist cinema would shed light on any of it. (I could double check this very moment, the Cinema books are about five feet away from me, but...) I will try to see the Renoir version soon, and I'll keep an eye out for the finale. Thanks for the great comments!